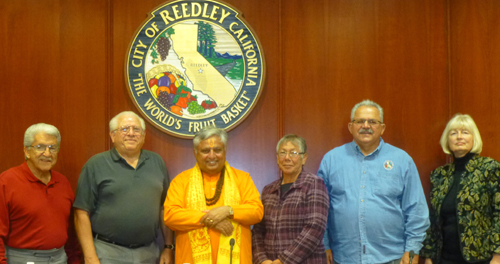 Hindu statesman Rajan Zed delivered the opening prayer from ancient Sanskrit scriptures before the City Council. After Sanskrit delivery, he then read the English translation of the prayer. Sanskrit is considered a sacred language in Hinduism and root language of Indo-European languages.

Zed, who is President of Universal Society of Hinduism, recited from Rig-Veda, the oldest scripture of the world still in common use, besides lines from Upanishads and Bhagavad-Gita (Song of the Lord), both ancient Hindu scriptures. He started and ended the prayer with “Om”, the mystical syllable containing the universe, which in Hinduism is used to introduce and conclude religious work.

Reciting from Brahadaranyakopanishad, Rajan Zed said, “Asato ma sad gamaya, Tamaso ma jyotir gamaya, Mrtyor mamrtam gamaya”, which he then translated as “Lead me from the unreal to the Real, Lead me from darkness to Light, and Lead me from death to Immortality.”'

Reciting from Bhagavad-Gita, he urged councilmembers to keep the welfare of others always in mind. Councilmembers, city employees and public were seen standing in prayer mode with their heads bowed down during this invocation.

Wearing saffron colored attire, a ruddraksh mala (rosary), and traditional sandalpaste tilak (religious mark) on the forehead, Zed sprinkled few drops of water from river Ganga of India, considered holy by Hindus, around the podium before the prayer.

Zed presented a copy of Bhagavad-Gita to Mayor Robert O. Beck, who introduced and thanked Zed. “It is a historic moment of pride for the community when the prayers from ancient Sanskrit scriptures are being read in this great hall of democracy of this great city of Reedley”, Zed stated before starting the invocation.

Zed is a global Hindu and interfaith leader, who besides taking up the cause of religion worldwide, has also raised huge voice against the apartheid faced by about 15-million Roma (Gypsies) in Europe. Bestowed with World Interfaith Leader Award; Zed is Senior Fellow and Religious Advisor to Foundation for Religious Diplomacy, Spiritual Advisor to National Association of Interchurch & Interfaith Families, etc.

Reedley, whose tagline is "The World's Fruit Basket", is a multi-cultural and friendly town along the Kings River. It hosts annual Reedley Fiesta, Electrical Christmas Parade and Street Faire. Ray Soleno and Nicole R. Zieba are Mayor Pro Tempore and City Manager respectively of Reedley, claimed to be located in the richest intensive agricultural production area in the world. Its notable residents include author Ernestine Gilbreth Carey, Olympian Lacy Barnes Mileham and baseball player Vic Lombardi.