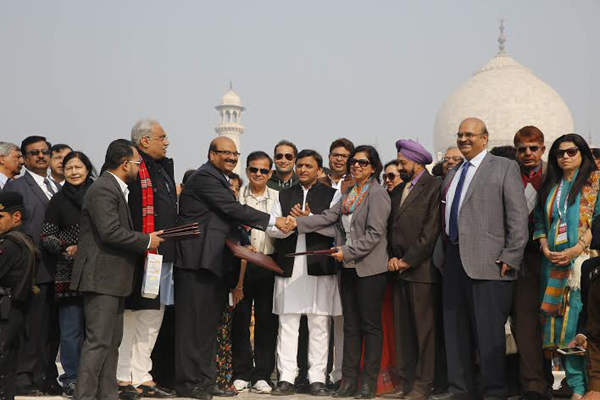 By Vincent Van Ross/IBNS | | 24 Jan 2016, 01:21 pm
#Uttar Pradesh, # Government of India, # Uttar Pradesh government, # Akhilesh Yadav
Agra, Jan 24 (IBNS) The youngest chief minister of the most populous state of India, AkhileshYadav, earlier this month inaugurated the first ever three-day Uttar Pradesh Pravasi Divas (UPPD) , a joint venture of the NRI department of Uttar Pradesh government and the Federation of Indian Chamber of Commerce and Industry in tune with the week-long Pravasi Bharatiya Divas celebrated by the Government of India in January every year.
The underlying idea of UPPD is to rekindle and consolidate the bonding of Non-Resident Indians (NRIs) and Persons of Indian Origin (PIOs) whose roots can be traced back to Uttar Pradesh and to encourage them to treat Uttar Pradesh as their preferred destination for investment in business. 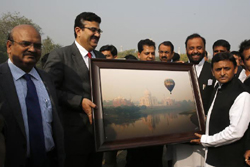 Akhilesh Yadav's inaugural speech was laced with emotional appeals to stir the deep-rooted sentiments of NRIs and PIOs from Uttar Pradesh.

The Uttar Pradesh government signed 13 Memorandums of Understanding (MOUs) with international organisations headed by NRIs or PIOs on the very first day of the celebration.
Business proposals have poured in from far and wide. These include Global Organisation of People of Indian Origin; South Pacific University and Indo-Canadian Chamber of Commerce; Indian Trade Exhibition Centre in Sharjah; Dubai-based Indian Business Council, India Association of Japan;  UP Association of North America; and, World Trade Centre among others. 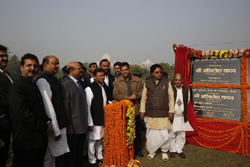 India is known to the outside world as the ‘Country of the Taj Mahal.’  But, the “City of the Taj’ is in Uttar Pradesh.  Akhilesh Yadav’s decision to host the UPPD in Agra instead of Lucknow had something to do with the lure of the Taj and he thought that it would attract more delegates to the UPPD.  The gamble paid off and it turned out to be a pleasant surprise even for chief minister AkhileshYadav.

The UPPD drew over 200 delegates and the NRI department had to close the registration of delegates before the opening day of UPPD as the venues could not accommodate more delegates along with government officials, media and security personnel needed to keep the arrangements in place. That is a huge draw for a single state considering the fact that the number of delegates attending Pravasi Bharatia Diwas celebrated by the Government of India is around 1,800.

UPPD did not happen overnight. AkhileshYadav had the vision to set up a separate NRI department in Lucknow way back in July 2014. The NRI department is engaged in creating an exhaustive database of NRIs and PIOs from Uttar Pradesh settled across the world, through Indian embassies in those countries.

Akhilesh Yadav inaugurated a website for the NRIs and PIOs from Uttar Pradeshhttp://www.upnri.com in January 2015 and issued UP NRI cards to facilitate smooth processing of business proposals of NRIs and PIOs from Uttar Pradesh.
Subsequently, the Uttar Pradesh government established a Migrant Resource Centre in Lucknow which is the nodal agency for the NRI department in the Uttar Pradesh government.  The NRI department functions from its head office in Lucknow under its Principal Secretary, Sanjiv Saran. Regional centres of the UP NRI department are likely to be established at Varanasi, Gorakhpur, Kanpur and Noida to improve facilitations to the Indian diaspora.  The thrust areas for NRI investment are infrastructure and development projects, education, finance, tourism etc.

UPPD was a three-day affair.  It opened with an interactive session between the UP government and the NRI investors after which the UP Chief Minsiter AKhilesh Yadav inaugurated  an exhibition highlighting the achievements of the Uttar Pradesh government in its development agenda and focusing on areas of interest for investment by NRIs and PIOs.  Sixteen NRIs were awarded UP Apravasiya Bharatiya Ratna Puraskar in recognition of their outstanding performance in the fields of their choice in foreign lands and for their contributions to the development of Uttar Pradesh.

The government claimed that since Akhilesh Yadav took over reigns of the Uttar Pradesh government in 2012, the state has made significant investments in development projects.  These include Agra-Lucknow expressway which is an extension of the Yamuna expressway from Noida to Agrato connect Lucknow with Delhi, and,Poorvanchal expressway; metro rail projects in Lucknow, Noida, Ghaziabad, Agra, Kanpur, Meerut and Varanasi; development of IT city in Lucknow; power sector and alternative energy resources; education and health etc. 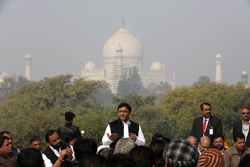 In the evening, renowned playback singer Rahat Fatah Ali Khan, entertained the guests with his mellifluous songs and kawwalis.  On the second day, the delegates were escorted to the Taj after which chief minister inaugurated the project for development of the Agra city as per international standards.  This will include a Mughal Museum, Agra Street Café, Agra Heritage Centre and a Taj Orientation and Interpretation Centre.  Later in the day, panel discussions were held on a variety of topics.

On the second day, six panel discussions were organized to engage the Indian diaspora on a variety of themes.

The evening saw a dance recital by the disciples of the Kathak maestro Birju Maharaj.  The third day was devoted entirely to a conducted tour of Agra, Mathura and Vrindavan for the delegates as tourism is also a major thrust area for Uttar Pradesh besides development projects. 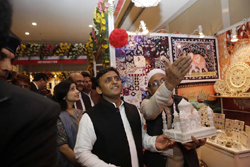 While UPPD was designed to attract investments from NRIs and PIOs of Uttar Pradesh, the proposal from the Abu Dhabi based Keralite NRI Yusuf Ali to invest Rs 1,000 crore to open a hotel and a retail chain in Uttar Pradesh employing over 3,000 employees took everyone by surprise.  Overshooting expectations, this has enhanced the scope of investment through UPPD beyond theborders of Uttar Pradesh.

If the Uttar Pradesh government follows up on its promises of infrastructure development, simplification of procedures for starting business for Indian diaspora and creates a conducive atmosphere for business projects in the state, this may mark the beginning of substantial fund flows from NRIs and PIOs into the state.  If that happens, it may encourage the chief ministers of other states to follow suit.
Related Images