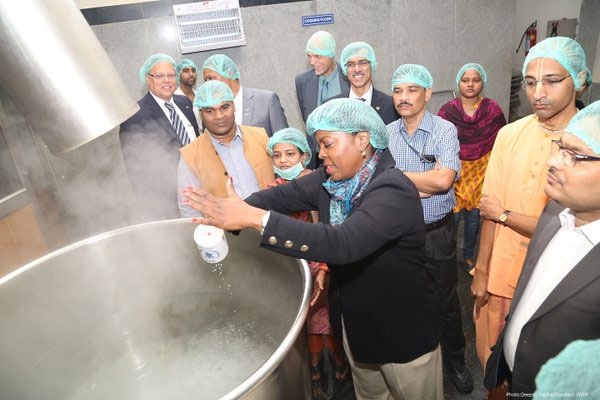 “The work done in India is critical to achieving Zero Hunger globally by 2030,” WFP Executive Director Ertharin Cousin said today at the end of a three-day visit to India, referring to one of the major goals of the 2030 Agenda for Sustainable Development, adopted unanimously by 193 Heads of State and other top leaders at a summit at UN Headquarters in New York in September.

“WFP supports the government with its global expertise and innovative solutions to boost food and nutrition security,” she added.

During her visit, Cousins signed a letter of intent with the Ministry of Consumer Affairs, Food and Public Distribution which will bring together several ministries with the WFP to finalize a proposal for establishing a Centre of Excellence on Food and Nutrition Security in India.

She also met business leaders to further partnerships between the business community and WFP to address malnutrition and food insecurity in India, underscoring the role of the private sector in achieving the Agenda goals through their expertise and funding.

WFP in India supports the central and state governments in the effective and efficient implementation of the National Food Security Act and in enhancing nutrition.

Cousin also visited Odisha in eastern India where WFP is collaborating with the state government to address food and nutrition security issues, meeting the Chief Minister and other top officials and inaugurating WFP’s rice-fortification initiative, by which school children are served rice enriched with iron under the Mid-Day Meal programme to decrease anaemia.