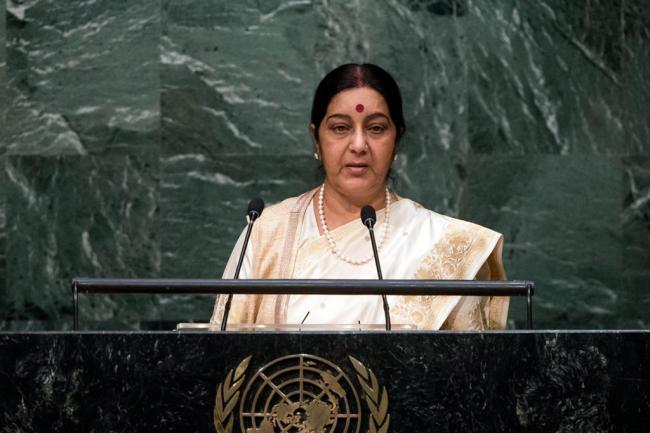 “We do not need four points, we need just one – give up terrorism and let us sit down and talk. This was precisely what was discussed and decided by the two Prime Ministers at Ufa this July,” she asserted at the annual General Debate, referring to the proposal presented by Pakistan on Wednesday.

She said that it is unacceptable for a country to support terrorism as part of statecraft. She also deplored Pakistan’s inaction against terrorists who masterminded the Mumbai attacks in 2008.

She said, “The world shared our outrage at the 2008 Mumbai terror attacks in which citizens of many nations were helplessly butchered. That the mastermind behind the attack is walking free is an affront to the entire international community."

"Not only have past assurances in this regard not been honoured but new cross-border terrorist attacks have taken place recently, in which two terrorists from across the border have also been captured alive,” she added.

Swaraj said that the purpose of these attacks is meant to destabilize India and “legitimize Pakistan's illegal occupation of parts of…Jammu and Kashmir and its claim on the rest of it.”

However, she also asserted that ‘India remains open to dialogue’ but insisted that talks and terror cannot go together.

“Let us hold talks at the level of National Security Agency (NSAs) on all issues connected to terrorism and an early meeting of our Directors General of Military Operations to address the situation on the border. If the response is serious and credible, India is prepared to address all outstanding issues through a bilateral dialogue,” said Swaraj.

She said, “The world must demonstrate that it has zero tolerance for terrorists who kill and maim innocent civilians with action based on the principle of prosecute or extradite."

"Countries that provide financing to terrorists and safe havens for their training, arming and operations must be made to pay a heavy price by the international community,” she said.

She also urged the pressing need to reform the UN Security Council to preserve the centrality and legitimacy of the UN.

She further suggested that more developing nations be included in the decision-making structures of the Security Council. She also pressed for changing what she described as the Council’s outdated and non-transparent working methods.