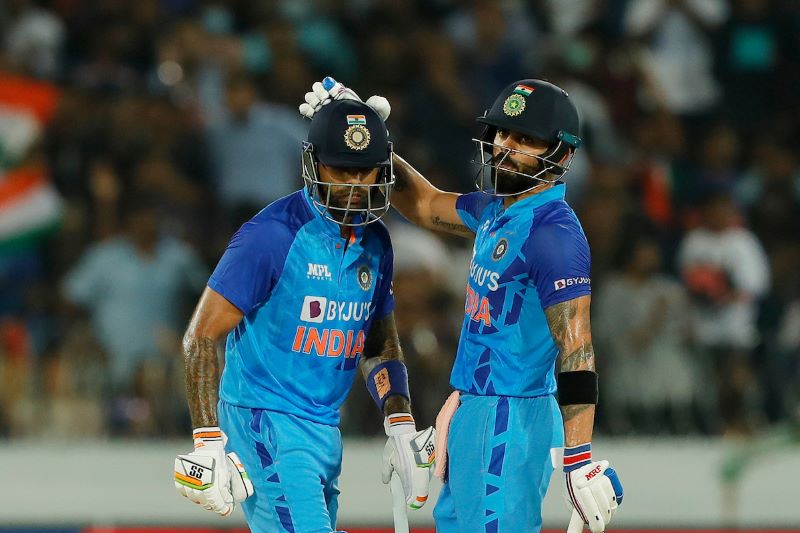 Hyderabad/UNI: A stormy 69 off 36 by Suryakumar Yadav and a 104 runs partnership for the third wicket with half-centurion Virat Kohli powered India to a three-match T20I series win after the hosts defeated Australia by six wickets in the decider at the Rajiv Gandhi International Stadium here Sunday.

Their post-powerplay game was top notch as they ensured a boundary almost every over to keep the required run rate in check.

And with some of his outrageous shots, Suryakumar brought the run rate down in a hurry.

Josh Hazlewood broke Suryakumar's stand with Virat and Australia came back a bit, but with wickets in hand and with Hardik Pandya (25 no off 16, 2x4s 1x6) and Dinesh Karthik (1 no) to come in, it was India's game.

Needing 11 runs in the last over, Kohli (63 off 48, 4s-3 6s-4) mightily swung the bat on the very first ball over long-on off Daniel Sams for a six, but the next ball he succumbed after muscling the ball off the backfoot straight into the hands of Aaron Finch at extra-cover.

Karthik mistimed the drive to long-off for a single off a slower ball, reducing the target to four off three balls.

Much was expected off Hardik, but he could put bat to a rather intelligent ball outside off stump by Sams.

With four runs needed in two balls, Hardik cleverly opened the bat face and sliced it fine with one hand to send the ball to the left of short third man for a boundary, thus sealing the series for India with a ball to spare.

Suryakumar walked in when India were struggling at 30/2 in 3.4 overs, losing both openers KL Rahul and Rohit Sharma falling to Sams (2/33) and Pat Cummins (1/40) respectively.

Suryakumar was at his supreme best as he got off with a boundary early on by hopping and flaying Cummins through vacant extra cover.

He was particularly severe to Glenn Maxwell and Adam Zampa.

In the eighth over, Suryakumar went after Maxwell for two consecutive boundaries.

Staying leg-side to a flatter one, he executed a fantastic cut shot past backward point for four, and then slog swept to split deep mid-wicket and deep backward square leg to perfection.

In the 13th over, he whacked Zampa for back-to-back sixes, bringing momentum back in the Indian chase.

The first six of the over was a stylish whip over long-on that got him to his half century.

In the next ball, he adjusted the bat grip and played a brilliant lofted cover drive off Zampa's full toss for another six.

Soon after posting a 100-plus partnership with Virat, Suryakumar departed.

Virat started off with some exquisite shots, but dropped anchor after he lost captain Rohit Sharma for 17.

Earlier, fifties by Cameron Green at the top and Tim David in the death overs propelled Australia to 186/7.

Australia started with a flurry in the first five overs with Green going after the Indian bowlers, reaching his fifty in 19 balls, quickest against India by any player in T20I.

Post that, India sprung back into the game. Bhuvanesh Kumar sent back the murderous Green (52 off 21, 7x4s 3x6s) in the last ball of the fith over.

The spin-duo Axar Patel (3/33) and Yuzuvendra Chahal (1/22) curbed the hitting instincts of the Aussie batsmen in the middle overs as they picked up four wickets between them after conceding 55 runs.

David cracked his first T20I half century in just 25 balls.

Both David and Sams came down heavily on pacers Bhuvneshwar and Jasprit Bumrah ended up leaking 89 runs in 7 overs, out of which 39 came in their last two overs.

Harshal Patel applied brakes on Australia to deny them cross 190 by just giving away 7 runs in the final over.