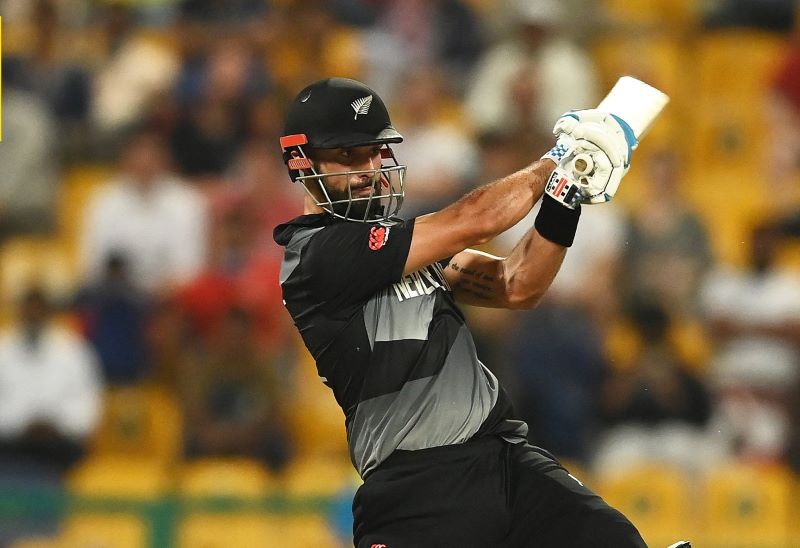 Abu Dhabi/IBNS: A spectacular unbeaten knock of Daryl Mitchell dashed England's hope of reaching the T20 World Cup final as they were defeated by New Zealand by five wickets with one over to spare in the first semi final played here on Wednesday.

Chasing a challenging target of 167, New Zealand were in the backfoot straight away losing Martin Guptill (four off three balls) and skipper Kane Williamson (five off 11 balls) in the powerplay.

Not kicking the panic button, Guptill's opening partner Daryl Mitchell and wicketkeeper-batsman Devon Conway first steadied the innings and then counterattacked the English bowling line up.

Just when their partnership was going strong, Mitchell lost his partner Conway, who was dismissed by Liam Livingstone for 42 off 38 balls.

Though Glenn Phillips was sent to dugout cheaply, James Neesham joined the run chase in style and aptly supported Mitchell, who remained unbeaten at 72 off 47 balls.

Though Neesham, who scored a quick 27 off 11 balls, was picked by experienced Adil Rashid in the last ball of the 18th over, Mitchell hit back to back two sixes in the next over and then a boundary to deny England another final of the ICC tournament.

Earlier, England, who were sent to bat first, scored a formidable total of 166/4, thanks to an aggressive, unbeaten knock of 51 by Moeen Ali and a 41-run innings by Dwaid Malan.

Now in the final, New Zealand will face either Pakistan or Australia, who will be playing in the second semi final on Thursday.