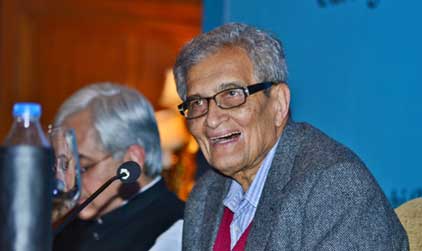 Modi is not my favourite: Amartya Sen

India Blooms News Service | | 30 Apr 2014, 05:10 pm
#Amartya Sen, # Modi
Bolpur, April 30 (IBNS) Voting in an Indian election after 13 years, Nobel laureate Amartya Sen on Wednesday disapproved of BJP prime ministerial candidate Amartya Sen as the next leader of the nation, holding that a leader with secular credentials and long term view of the economy was required.

Admitting that Modi is popular and especially among the business class, Sen after voting here in Bolpur at his birthplace, said though Modi has popular support he is not his favourite candidate at all.

Sen said the leader guiding India should have a clear notion that the "expansion of economy requires a long term engagement with education and healthcare of the people".

He said only educated labour force can make the economy sustainable.

He said he voted because it is an important election and voting means recognizing the voice of the people.  "Participating in the election is part of the political participation," he said.

He said he could not vote earlier owing to his academic engagements abroad.

West Bengal is undergoing polls in nine constituencies on Wednesday along with other states and UTs as India votes in the seventh phase.