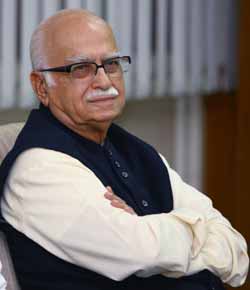 Modi's role in BJP victory needs to be assessed: Advani

India Blooms News Service | | 16 May 2014, 06:32 pm
# LK Advani
New Delhi, May 16 (IBNS): With the Bharatiya Janata Party (BJP) all set to form the next government in New Delhi with a clear majority and under the Prime Ministerial ship of Narendra Modi, party veteran LK Advani on Friday raised eyebrows after he said an assessment is required on how much the Gujarat CM's leadership had contributed to the win.

"I think there is a need for a detailed analysis on this. It needs to be assessed as to how much contribution has been made by Narendra Modi's leadership, RSS and BJP towards the party's victory," he said.

I believe corruption, inflation and bad governance were the main reasons for such results to come out," he told reporters here.

Advani won the Lok Sabha elections from Gandhinagar in Gujarat.