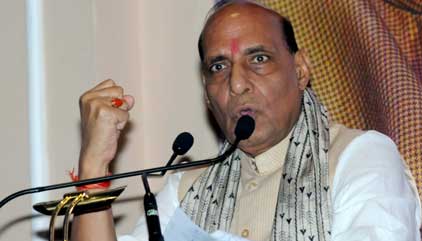 India Blooms News Service | | 16 May 2014, 05:39 pm
#Rajnath Singh
New Delhi, May 16 (IBNS) With Bharatiya Janata Party (BJP) all set to form the next government in New Delhi with a clear majority, party president Rajnath Singh on Friday sought former PM Atal Bihari Vajpayee's blessings by visiting him at his residence.

Earlier in the day, he said though it was being said that the Indian success story has ended, time has come to rewrite it.

"Time has come for us to rewrite the Indian success story," said Rajnanth Singh addressing the media.

He said the new government will give good governance and credited the victory largely to Modi's hard work.

"People have voted for a change and for Narendra Modi and the BJP," he said.

He thanked the BJP workers on the ground who made possible the win.

He said BJP is now a party for all, from farmers to tribal to forest dwellers to lower castes to those living in slums.

He said BJP is not anymore an urban party.

"People had lost faith in political parties and politicians. Now it is back again with this verdict," he said.

He also urged all party workers to exercise restraint after the win and conduct themselves responsibly and not play to any provocation.

He said all decisions will be taken in parliamentary board meeting of the party.

"We welcome all political support," he said, adding that all NDA allies will be part of the government.

Singh said L K Advani is not only their senior leader but also their mentor and guide. He also rubbished reports of differences in the party over Modi.

He said the party believes in justice to all and appeasement to none.