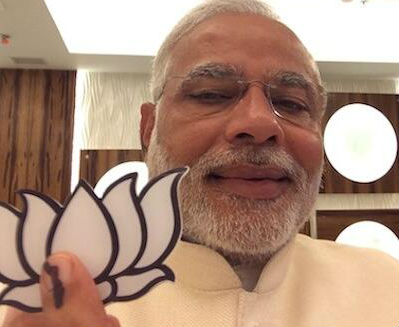 Modi is in fresh controversy after he waved party symbol lotus while addressing media after casting his ballots at Ranip under Gandhinagar constituency in Gujarat on Wednesday.

Opposition alleged that the waving of the lotus is a violation of model code of conduct. The Congress reportedly filed a complaint with the Election Commission for Modi's attempt to influence voters on poll day.

Modi waved the lotus symbol after voting and addressed media holding it in hand.

Congress leader Meem Afzal demanded cancellation of Modi's nomination from both seats (Varanasi in Uttar Pradesh and Vadodara in Gujarat).

India is undergoing its seventh phase of elections on Wednesday with 89 parliamentary constituencies across seven states and two union territories going to the hustings.

Voting is being held in Gujarat, Punjab, Uttar Pradesh, Bihar, West Bengal, Jammu and Kashmir and Telangana besides in Dadra and Nagar Haveli and Daman and Diu.

A total of 13.83 crore people are eligible to vote in this round.

In this phase the whole of Gujarat and Punjab are voting.