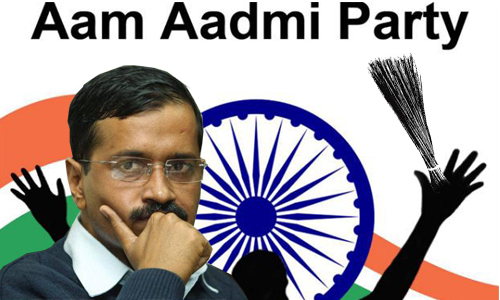 "I think the BJP has a hand behind the attacks on Arvind Kejriwal. There should be a probe into this political conspiracy," said Ashutosh.

Hardly four days after he was attacked in Delhi's Dakshinpuri area, former state chief minister Kejriwal was on Tuesday slapped by an unidentified man while he was campaigning in Sultanpuri.

According to reports, the man, yet to be identified, was dressed like an autorickshaw driver.

The attacker was immediately taken into custody.

Reacting to the incident, Kejriwal tweeted: "I am just thinking - why am i being repeatedly attacked? Who r the masterminds? What do they want? What do they achieve?"

"Is violence an answer to country's problems? let them tell me place n time. I will come there. Let them beat me as much as they want ... but will that solve the problems?" he asked.

On Friday, a person was arrested after he allegedly slapped Kejriwal while he was campaigning for his party in Dakshinpuri area of South Delhi.

The attacker identified himself as Abdul Wahid and he said he is a resident of Batla House area in Jamia Nagar.

The AAP workers said he was paid Rs 25,000 for attacking Kejriwal.

In November last year, a chaos broke out at the press conference of the AAP in New Delhi with black ink being thrown at Kejriwal by a man named Nachiketa.

He claimed himself to be a Bharatiya Janata Party (BJP) activist.