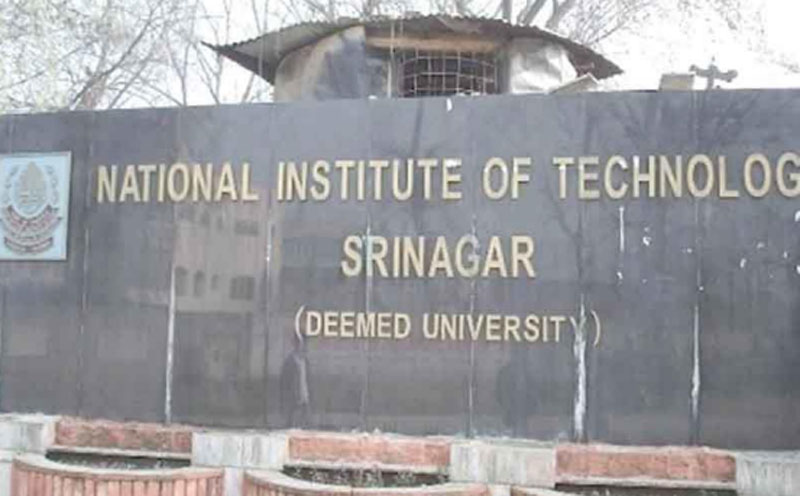 Srinagar: The authorities at National Institute of Technology (NIT) Srinagar have decided to discontinue holding physical classes of the students over COVID-19 concerns. The Director NIT Srinagar, Prof. (Dr) Rakesh Sehgal while talking to Greater Kashmir said they have decided to discontinue offline classes of first year and second year students after seven positive cases were reported from the institute within this week.

Prof Sehgal said they had called only last year students for offline classes but the students of second year persistently demanded to appear in physical classes as well.

“So we had started physical classes for second year on demand of students. But now we have asked all of them (2nd year students) to go back home because we cannot take any risk while continuing physical classes at the institute,” he said.

Meanwhile a notification issued by Dean Students Welfare has also notified that there will be no off line classes from April 2 till further orders.

“The B-Tech students of Batch 2019 and M-Tech Batch 2020 are informed to vacate the hostels immediately and proceed to their respective homes,” the notice reads.

The final year B-Tech and M-Tech students residing in the hostels have been informed through the notice to either vacate the hostels or stay within boundaries of the hostels.

“Neither they nor the day scholars of the said batch will be allowed to leave or enter the campus from tomorrow April 2 of 2021. For any emergency the students can contact the concerned wardens,” the notice reads.

The notice further reads that in view of the increasing COVID-19 cases, the students and the staff entering in the institute should follow the already notified SoPs strictly and in letter and spirit.

“Anyone found without mask will be fined and debarred from entering the institute campus. This is notified with prior approval of the competent authority,” the notice reads.

The Director NIT Srinagar meanwhile said the final year students have been asked to stay put in hostels as it will not be good to send them back home.

“But locals students can go to their homes but non-local students are allowed to use hostels. Besides attending online classes the final year students (locals and non-local) will be allowed to have informal interaction with the teachers in small groups. But there will be no formal classes physically,” he said.