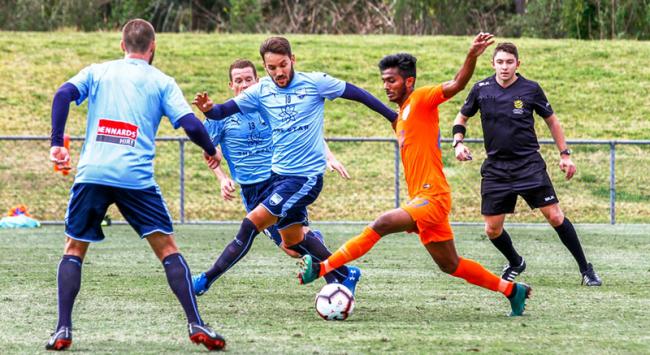 The star-studded Sydney FC had to wait till the 37th minute to open the scoring from Brosquey before Adam Le Fondre doubled the gap within 6 minutes. Indians were looking more threatening after the breather but a low strike from Trent Buhagiar in the 86th minute sealed the tie for the Sky Blues.

As the coach predicted earlier, the hosts started dictating the game since the kick-off but their efforts were thwarted by the resilient Indian defence until the 37th minute when Brosquey headed a cross from Michael Zullo home.

Six minutes later, renowned English attacker, Adam Le Fondre found the back of the net from a close range to double the lead before the teams headed to the dressing room.

After the hour-mark, Ashique Kuruniyan came very close to break the deadlock but his firing shot went off the target.

Indians started to push the A-League powerhouse further in their quest for the elusive goal but finally, Trent Buhagiar poached another goal four minutes to the end of the regulation time to confirm a win for the Sky Blues during their pre-season.

Constantine felt they wanted a 'tough game' and this one was nothing less than a ‘very good lesson’ for the team.

"We knew very well that it was going to be a tough test against a terrific team and certainly, it was. Our boys were a little surprised with their speed and constant movement but overall, it was a very good lesson for us", he added further, "We got better as the game progressed and created a few opportunities as well. Overall, we wanted a tough game and we were presented with one. Now, we know more about ourselves as a team and of course, as individuals."

India are scheduled to play their third game Down Under against Rydalmere Lions FC on August 31, 2018. Kick-off is at 12:30 PM IST.