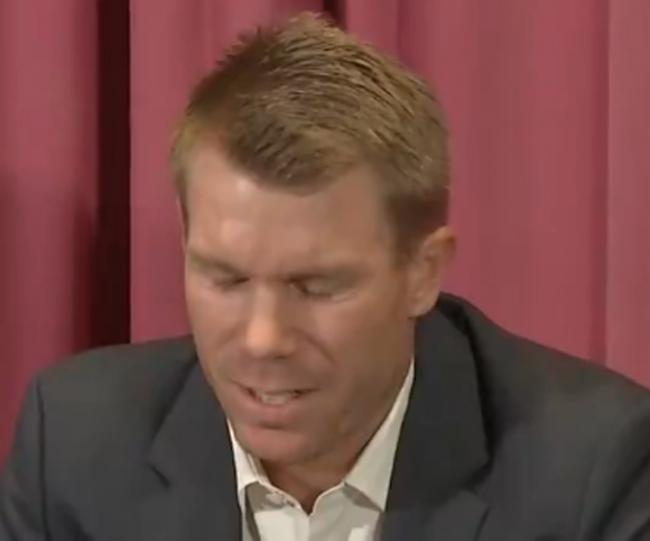 Canberra, Mar 31 (IBNS): Tainted Australian opener David Warner on Saturday apologised for the ball tampering scandal levelled against him and took all responsibilities on his shoulder as the former vice-captain of the squad.

Warner was the vice-captain of the Australian squad when during the third day of the Third Test match against South Africa the ball-tampering episode emerged.

David Warner, ex-Australian skipper Steve Smith were banned for 12 months from playing international cricket by the Cricket Australia on Wednesday.

Cameron Bancroft was banned from international cricket by the highest cricket governing body of the nation for nine months.

David Warner said he has "resigned to the fact" he may never play for Australia again following the scam which has hit the Australian cricket paradigm hard.

David Warner, during an emotional press conference, said: "I want to again say thankyou, I take full responsibility for my part in what happened and I am deeply sorry for the consequences of what I was involved in. I failed in my responsibilities as vice-captain of the Australian cricket team."

Apologising to his family, he said: "I want to apologise to my family, especially my wife and daughters. Your love means more than anything to me and I would not be anything without you. I promise I won't put you in this position again."

David Warner said his only aim was to bring glory to his nation by playing cricket.

"In striving to do so, I have made a decision which has had the opposite effect and it's one that I'll regret for as long as I live," David Warner said.

"In the back of my mind, I suppose there is a tiny ray of hope that I'll maybe one day be given the privilege of playing for my country again, but I am resigned to the fact that may never happen," he said.

He did not answer several questions asked by the media during the press conference.

Warner later tweeted to inform that he will give answers to them in the proper time and place.

Warner tweeted: "I know there are unanswered questions and lots of them. I completely understand. In time i will do my best to answer them all. But there is a formal CA process to follow."

"I am taking advice to make sure I properly comply with that process and answer all questions in the proper place and at the proper time," he said.

David said: "I should have mentioned that in my press conference I’m sorry for not making it clearer. With so much at stake for my family and cricket I have to follow this process properly. I think that’s fair."

Steve Smith had earlier on Thursday addressed the media and took responsibility of the ball-tampering episode on his shoulder.

Australian coach Darren Lenhann resigned from his post on Thursday.

Cricket Australia on Wednesday said his involvement in the incident was not found and would continue as the coach of the national side.

South Africa are up 2-1 in the series.