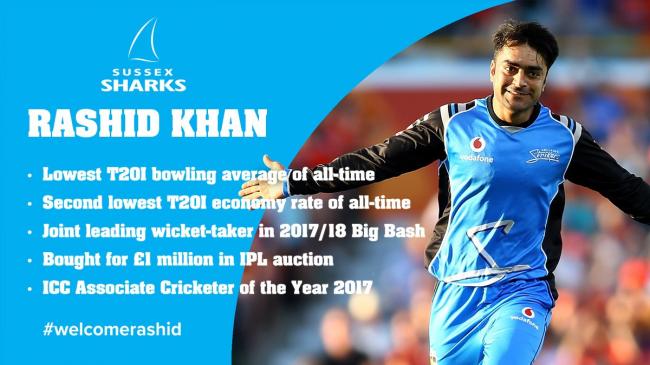 Kabul, Feb 27 (IBNS): Afghanistan cricketer Rashid Khan is passing through a golden phase in his career as he has been named the skipper of the national team ahead of the ICC World Cup Qualifier.

Rashid, aged just 19 years 160 days, has become the youngest  captain in the history of international cricket.

He recently became the number one bowler in international T20 cricket.

He will also be seen in the upcoming IPL season.

Rashid was named the skipper of the national side after regular captain  Asghar Stanikzai was diagnosed with appendicitis.

As per a statement released by Afghanistan's cricket body Asghar will undergo surgery in a local hospital in Zimbabwe.

" Afghanistan captain, Asghar Stanikzai, has been diagnosed with appendicitis and will shortly undergo a surgery in a local hospital in Zimbabwe. The doctors have advised that he will be able to return to cricket in approximately 10 days. Current vice-captain Rashid Khan will lead the team in his absence," read the statement.

Afghanistan is scheduled to play warm up matches against West Indies and Netherlands on Feb  27 and Mar 1, respectively, in Harare before they travel to Bulawayo for the group-stage matches of the ICC World Cup Qualifier.

Afghanistan take on Scotland on Mar 4 to launch their campaign for qualification to the ICC Cricket World Cup 2019.