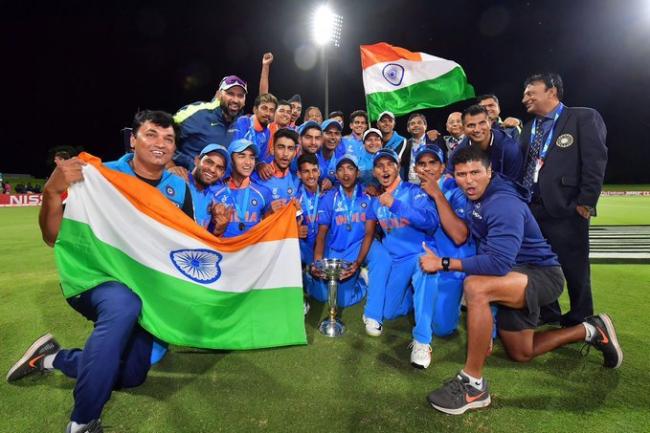 After bowling out Australian Under 19 team for 216 runs, Indian batsmen reached the target of 220 runs by losing just two wickets with 67 balls to spare.

Harvik Desai (47) and Kalra remained unbeaten till the end as they ensured India win the match and lift the trophy for a record fourth time in the history of the tournament.

Kalra remained the sensation of the day as he smashed eight boundaries and three sixes in his knock that ensured India another victory.

Shubman Gill, who had hit a century against Pakistan in the semi-final, contributed 31 runs in the innings before losing his wicket to Uppal.

Captain Prithvi Shaw added 29 runs before departing in the 12th over of the game.

Earlier, Australia were bowled out for 216 runs.

Merlo remained the top scorer of the innings with 76 runs coming from his willow.

He hit six boundaries in his knock.

President Kovind said he was proud of the captain Prithvi Shaw and his team for their winning performance.

"Congrats to India's talented young cricket team for winning the Under-19 World Cup. Calmness and composure of our boys embellishes their skills. Proud of captain @Shaw_Prithvi and his mates, as well as of coach Rahul Dravid and the hard-working support staff #PresidentKovind," Kovind tweeted.

Modi said the performance of the team left him thrilled.

"Absolutely thrilled by the stupendous achievement of our young cricketers. Congratulations to them on winning the Under-19 World Cup. This triumph makes every Indian extremely proud," he said.

Union Sports Minister Rajyavardhan Rathore said: " Bravo #Boysinblue! You did it! Big congratulations to you on winning U-19 Cricket World Cup 2018. Brilliant job done by the whole team under the guidance of #RahulDravid. India is super proud of you! #Under19CWC."

Apart from the world of politicians, Indian sports personalities also joined the moment of celebration and wished the Under 19 team for the victory at the grand event.

Indian cricket icon Sachin Tendulkar tweeted: " WITH GREAT TEAM WORK, BIG DREAMS WORK. Congratulations to our WORLD CHAMPIONS!! We are proud of you. A big congratulations to Rahul and Paras for their guidance. #ICCU19CWC #INDvAUS ."

Indian senior team captain Virat Kohli, who had also guided India to Under 19 World Cup victory in the past, was quick in wishing his future colleagues: " What a win for the U19 boys, take it as a stepping stone; Long long way to go! Enjoy the moment! @BCCI #U19CWC ."

Former player VVS Laxman wished: " Congratulations to the Indian team on dominating the #U19WorldCup and being the deserved champions. Everyone stood up and maintained the intensity throughout the tournament. Truly memorable win. Cherish and soak in this moment. #INDvAUS."

Former Indian opener Virender Sehwag remarked: " Every Indian is delighted, all credit to Rahul Dravid for committing himself to these young kids ,and a legend like him deserves to lay his hands on the WC. Only Fitting. #INDvAUS."

Indian cricketer Yuvraj Singh said: " Many congratulations to India u19 on winning the World Cup ! Great team effort no suprises at all on such a champion side #RahulDravid ."