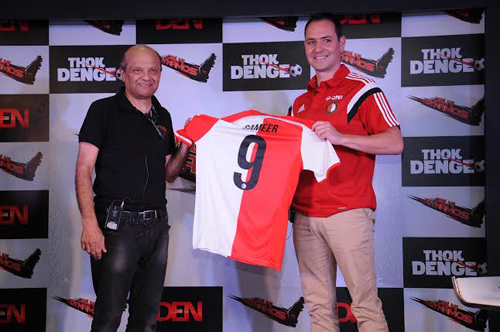 DEN also announced its alliance with Feyenoord Rotterdam – a leading football club & academy from the Netherlands. Feyenoord’s football academy has been voted as the best academy in the Netherlands for 5 successive years.

According to the CIES Football Observatory, Feyenoord is the World No. 1 in Player Development for this year’s FIFA World Cup. Including Robin Van Persie, the FIFA World Cup 2014 had 12 Feyenoord Rotterdam-trained players, the highest from any club globally.

As a part of the alliance with DEN, Feyenoord will share its immense knowledge of the sport and assist the Delhi Dynamos in overall development of its team in addition to providing world class players and technical staff.

DEN aims to create a robust football ecosystem in Delhi and Northern Indian along with giving them a team they can support with pride. The alliance with Feyenoord Rotterdam marks the first step in Delhi Dynamos’ mission of building football into a leading sport across Delhi and Northern India. The team aims to get the support all football fans in North India and unite them behind one name, Delhi Dynamos.

The team name, the team philosophy, anthem and the Delhi Dynamos’ alliance with Feyenoord Rotterdam were unveiled at an event held at the Jawaharlal Nehru Stadium, the home stadium of the Dynamos. The stadium is getting a brand new world-class football pitch in preparation for hosting the Delhi home matches of the ISL.

Sameer Manchanda, Chairman & Managing Director of DEN Networks, said: “Football is the world’s biggest sport and is now set to become India’s leading sport. DEN is excited to be a part of India’s football movement. We hope the Delhi Dynamos will inject pride and passion to all Delhiites and football fans of the region. With Feyenoord Rotterdam, we look forward to building a team of world-class players who can inspire with their skills and represent our city’s hopes and aspirations. Our dream is to take India to the global football stage and ultimately to the FIFA World Cup”

Gido Vader, Head of International Relations, Feyenoord Rotterdam; said:  “Feyenoord Rotterdam is thrilled to be associated with the Delhi Dynamos. The Indian football opportunity is huge, and we are looking forward to assisting DEN in creating a fantastic team and ecosystem through the Indian Super League.”