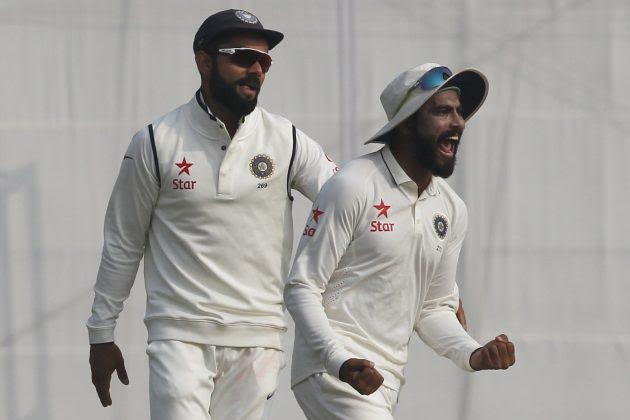 India Blooms News Service | | 30 Nov 2016, 01:32 pm
# ICC, #TestCricket, #ViratKohli, #MohaliTest, #RavichandranAshwin, #RavindraJadeja
Dubai, Nov 30 (IBNS): India captain Virat Kohli has moved up to a career-best third spot in the latest MRF Tyres ICC Player Rankings for Test Batsmen after coming up with a useful contribution in his teamâ€™s eight-wicket win over England in the third Test in Mohali that helped take a 2-0 lead in the five-match series, an official release stated.

The 28-year-old Kohli scored 62 and six not out to move to 833 points, within 14 points of England’s Joe Root in a list led by Australia captain Steve Smith. Starting the series in 15th position, Kohli has risen at a fast pace scoring 405 runs in the three Tests against England.


Kohli, who is top-ranked in Twenty20 internationals and second in One-Day Internationals, looks determined to top the table in Tests, the only format in which he has never been top-ranked.

The remaining two Tests provide more opportunity to Kohli, who had led India to victory in the ICC U19 Cricket World Cup in Malaysia in 2008.

England’s Jonny Bairstow has also reached a career-best ranking of ninth as he has shot up three places with knocks of 89 and 15 while Australia opener Usman Khawaja has moved up nine places to 19th rank after a match-winning knock of 145 that helped Australia win the day-night final Test against South Africa in Adelaide by seven wickets after losing the opening two Tests.

For South Africa, Faf du Plessis’s innings of 118 not out and 12 have helped him move up eight positions to 23rd rank while opener Stephen Cook has moved up 30 places to a career-best 44th position after scoring 40 and 104 in Adelaide.

Ross Taylor has moved up four places to take the 18th slot after scores of 37 and 102 not out in New Zealand’s 138 runs victory over Pakistan in Hamilton.

In the MRF Tyres ICC Player Rankings for Test Bowlers, Australia pace bowler Josh Hazlewood has moved into the top five for the first time after taking six wickets in Adelaide.

He has moved up four places to take fifth position.

Meanwhile, in the list of all-rounders, Ravindra Jadeja has gained two slots to reach a career-best fourth slot after scoring a crucial 90 in his only innings in Mohali.

His spin partner Ravichandran Ashwin has consolidated his position at the top with 493 points, a tally not reached by anyone since retired South Africa player Jacques Kallis in 2008.