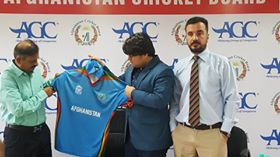 Afghanistan Cricket Board said apart from Rajput, Indian cricketer Mohammad Kaif was also shortlisted for the final round of interview.

He will replace former Pakistani cricketer Inzamam-ul-Haq.He quit the job in April.

“Mr. Rajput, who has coached the Indian Under-19 Cricket side as well as the Mumbai Indians franchise in the IPL, 54-year-old’s experience is a key asset for Afghanistan Cricket,”  Nasimullah Danish Chairman of Afghanistan Cricket Board was quoted as saying by the board website.

In his career as coach, the Indian was earlier appointed as cricket manager before India's successful campaign at the ICC World Twenty20 in South Africa and held the position till the tour of Australia in 2007-08.

Nasimullah Danish, Chairman of Afghanistan Cricket Board was quoted as saying by the board website, “Mr. Rajput is technically and professionally strong coach in cricket, i am sure his presence with Afghan national cricket team will benefit the team; he will be joining team in Scotland, Ireland and Netherland tour.”