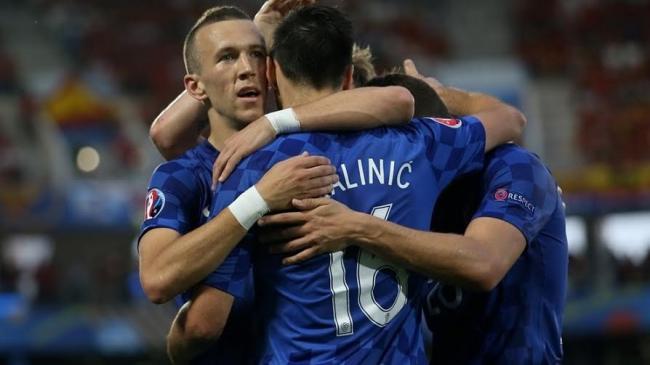 Croatia knew before kick-off that they were definitely through along with Spain thanks to Northern Ireland's loss to Germany, and there were five changes to the team that drew with the Czech Republic, partly enforced by injuries to Luka ModriÄ‡ and Mario MandÅ¾ukiÄ‡. The holders had the same XI for the third game running and their understanding paid dividends in the first seven minutes as Álvaro Morata, on the day he officially returned to Real Madrid, claimed his third goal of the finals by finishing off a pass from Cesc Fàbregas after a flowing move that began in defence. Nikola KaliniÄ‡ then forced David de Gea to work, and Ivan RakitiÄ‡ looped the ball on to the crossbar and off the post; Croatia were giving Spain a sterner test than in their previous matches. And just before half-time they were rewarded when a fine move culmtiated with a volleyed back-heel finish by KaliniÄ‡. That pattern continued in the second half when a high-pressing Croatia game knocked Andrés Iniesta off his stride for the first time in these finals, coupled with some superb skill in attack to get around the Spain defence. It seemed Spain would win when David Silva was fouled for a penalty but France-based Danijel SubašiÄ‡ brilliantly denied Sergio Ramos. Then PerišiÄ‡ beat the Spain defence and produced a cool finish to complete the turnaround. Man of the match: Ivan PerišiÄ‡ (Croatia) Credit: UEFA.com