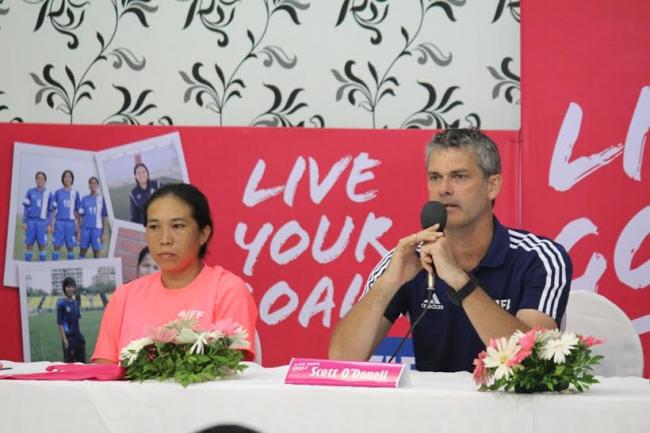 We aim to popularise Football among girls, states O'Donell

The Programme which aims to extend the outreach of Women’s Football in India while “fostering interest amongst the young generation” engaged more than 200 girls in Footballing activities through Grassroots festivities.

Speaking on the occasion, AIFF Technical Director Scott O’ Donell said: “FIFA has designed the Live Your Goals campaign to boost Women’s Football. 22 Countries are already initiating this Programme and it is time that we initiated it to strengthen our Women’s Football.”

“This is one of the many steps taken to raise the profile of Women’s Football in India,” he added. “The objective of Live Your Goals is to introduce and popularise Football among young girls.”

Building up to the FIFA Live Your Goals, All India Football Federation launched a Grassroots Session for 26 participants from the Indian National Women’s Team and WIFA, in which 126 kids participated and interacted with their role models like Bembem Devi.

“It’s a bonus to have the National Women’s Team as Coaches as they are the role models for many kids and the kids gain from their expertise in the game,” O’Donell echoed. “Veterans like Bembem Devi inspire the young generation to get in the game of Football. We want to try and attract more Women Coaches and this Grassroots Session is one of the many steps taken towards that.”

More than 200 kids participated in the launch of the FIFA Live Your Goals through various Footballing activities and festivities which continued throughout the day, thus, enabling the young crop to learn from the best in the business.

“It is great to see young girls involved in the project. And kudos to the parents for developing the passion in them,” O’Donell further added.

Meanwhile, Henry Menezes, WIFA, CEO maintained the “campaign has given girls a chance to come and play Football.”

“Going ahead, we are going to propose a Grassroots League for both Women’s and Men,” Henry pronounced. “We have chalked out a detailed roadmap for Maharashtra with AIFF’s help and this has been one of the many steps taken in a positive direction,” Menezes informed.

Going forward, the FIFA Live Your Goals aims to envelop India through various Football festivals and activities. The AIFF has already lined up 7 more Festivals, with the recent one launching in the Capital in November 2015.

“We aim to bring girls out of their closet and give them a chance to play Football. That is our objective,” O’Donell stated. “This is not once in a while thing. It is here to stay for a long period of time.”