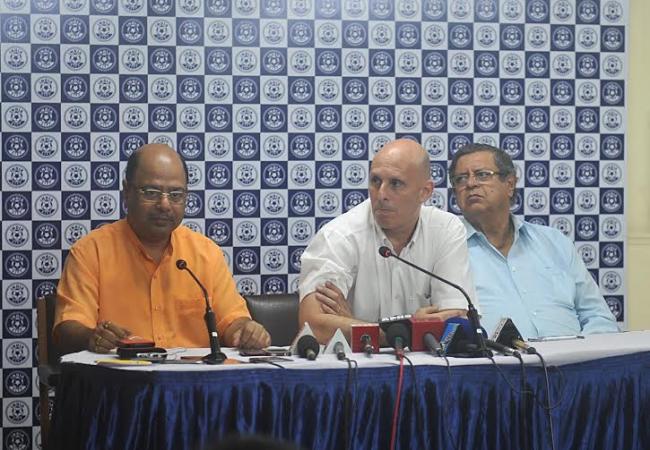 India Blooms News Service | | 23 May 2015, 03:39 pm
#Constantine needs support to improve football
Kolkata, May 23 (IBNS) Indian National Football Team Manager Stephen Constantine on Friday said he needs the support of every person, including the clubs, to develop football in India.

Addressing a press conference here, Constantine said, “I am not a one man band and I cannot do anything without everybody's help. I need the clubs, players and the AIFF beside me. We need everybody in the same direction.”

Speaking about the changes he is seeing in the football condition in India, he said, “A lot of good things have happened in the last 10 years. We (Indian Football Team), are now 26 places higher than what we were when I arrived here earlier. It is a good start.”

He said, “There will be bad days and that’s when you find out who are your friends. So we prepare for some good days and bad but if we are together then we can pass the storm and we will be where we want to be.”

He slammed the youth development system in Indian football and said, “We don’t have enough youth development. When I arrived 13 years ago, I took the under 18’s back then. The clubs more than the national team will see the benefit of playing u-14’s, u-12’s and u-10’s instead of trying to win youth competition with 21 year old in an under 15 tournament. The only damage we do is to ourselves. We deny the opportunity of young players to learn. We need to develop the young players of this country and there are plenty of them. We just need to find them.”

He also expressed his disappointment about the abysmal state of scouting system in this country.

“The other disappointment for me is the lack of systematic scouting system. Yes, we scout 1 or 2 tournaments in a year where we should be scouting anything that moves and from now on we will,"he said

Constantine appreciated the infusion of foreign coaches in major tournament like I-League, the rise of sports medicine and sports science and the growing interest in Indian football.

When quizzed about the Indian Super League and its credibility in raising the standard of Indian football, he said, “ISL is not a bad thing. Where else will the Indian players get to train with players like Elano, Silvestre.”

Constantine also cleared the air about the exclusion of Indian footballer Romeo Fernandez from the national squad stating his lack of match practice.