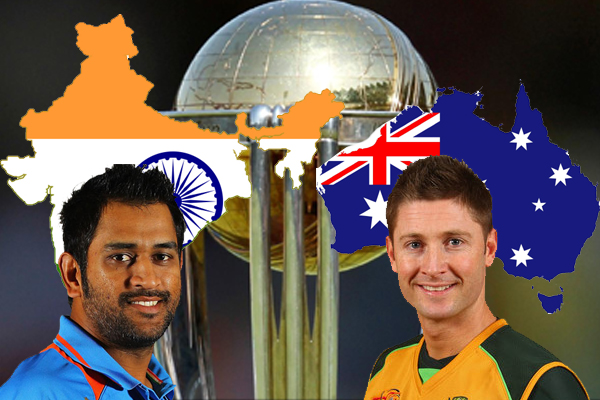 Chasing a record 329 runs target, India were bowled out for 233 runs with 19 balls to spare.

Losing wickets at regular intervals, India lost momentum and were never close to the required runrate after Australia posted a massive  328 runs for the loss seven wickets in their 50 overs.

MS Dhoni remained the top scorer for the side with his 65 runs. He hammered three boundaries and two sixes in his innings.

India openers Shikhar Dhawan (45) and Rohit Sharma (34) made a good beginning as they posted 76 runs in the first wicket partnership.

Australia pulled things back to their control after Dhawan was caught by Glenn Maxwell close to the boundary off Josh Hazlewood.

India started losing wickets at regular intervals with only MS Dhoni trying to put up some fight against the four-time World champions with his gutsy 65.

Virat Kohli (1), Suresh Raina (7) and Ravindra Jadeja (16) failed to deliver in the contest which was completely dominated by the Australian cricketers.

James Faulkner was the pick of the Australian bowlers as he picked up three wickets for the side.

With an aim of winning their fifth World Cup, Australia reached the final where they will meet New Zealand on Sunday.

Australia have written a new record in the history books as they have become the first team to post more than 300 runs on the scoreboard in a World Cup semi-final match.

After David Warner (12) departed early, Smith and Aaron Finch (81) joined in the task of recovering the innings as they added 182 runs in the second wicket partnership to help Australia post a mammoth total on the scorecard.

Smith smashed 11 boundaries and two sixes in his swashbuckling knock.

While the two batsmen were cruising fast and hammering the Indian bowlers all round the park, Umesh Yadav gave his side the second breakthrough by picking up the wicket of Smith.

India bowlers picked up wickets at regular intervals to keep the current champions in the match.

It was Mitchell Johnson (27), who played a quick-fire knock off nine balls, hitting four boundaries and six, to help his side post a hugely challenging 328 runs on the scorecard.

Umesh Yadav has picked up four wickets for India.

Australia earlier won the toss and elected to bat first.

It is for the first time in the tournament so far where Indian bowlers have failed to bowl out their opponent side. India had won all the seven matches they played in the World Cup until this clash against Australia.

After the match, India skipper MS Dhoni said: "They played very good cricket, over 300 is always a difficult score, I felt it was just over par, they could have had 350."

"We started okay but they bowled well, they got the reverse swing going. We were happy with where we were at the start of the tournament," he said.

Dhoni said he will decide on playing the 2019 World Cup during the World T20 tournament next year.