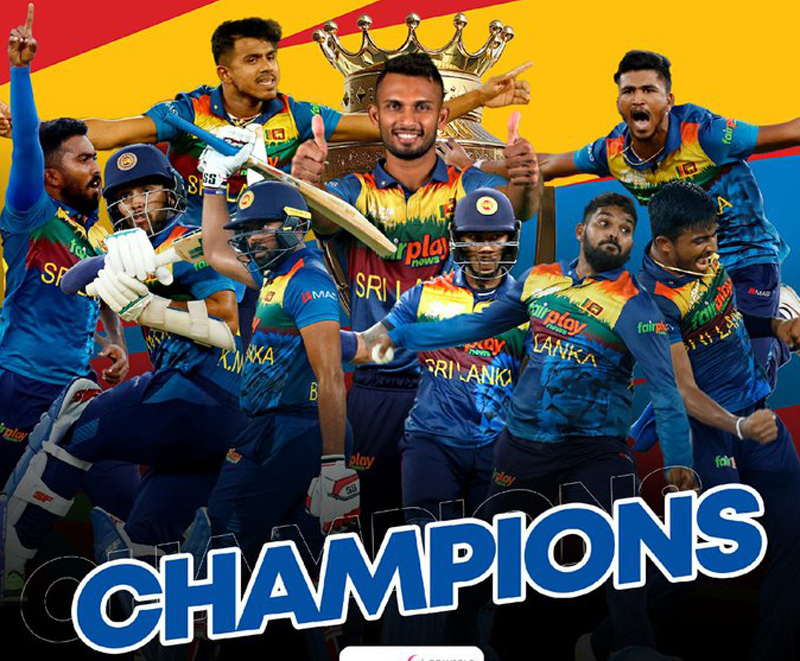 Dubai: Sri Lanka emerged victorious as they defeated Pakistan, a side which was considered as one of the favourites to lift the trophy, by 23 runs to clinch the Asia Cup here on Sunday.

After posting 170 runs for the loss of six wickets, Sri Lankan bowlers completed the task by bowling out Pakistan for 147 runs.

Mohammad Rizwan remained the only silverlining in the Pakistani squad as he smashed 55 runs.

He hit four boundaries and a six.

The rest of the batting lineup failed miserably to deliver.

Sri Lankan bowlers surely threw a challenge to the cricketing world ahead of the T20 World Cup which will be played next month with their dominance in the Asian circuit.

Sri Lanka had defeated Pakistan in the last Super4 clash of the tournament, heading to the final and surprising many specially after their poor start in the tournament against Afghanistan.

Rajapaksha walked into the field with Sri Lanka were tottering at 53/4 in 7.4 overs in a belter of a pitch. He took his time to settle in and once his eyes were set in, the left-hander showcased his trademark shots.

Rajapaksha soon lost his captain Dasun Shanaka for 2, further pushing Sri Lanka into a deep hole with the total reading 58/5 in 8.5 overs. But Rajapaksha and Wanindu Hasaranga (36 off 21, 5x4s 1x6) brought Sri Lanka into the game with their match-saving partnership. Both added 58 runs for the sixth wicket.

After the partnership was broken, Rajapakasha and Chamika Karunaratne (14 no in 14, 1x6) gave Sri Lanka the finishing touch by adding 54 runs off only 31 balls, an unbelievable recovery that bloated the total past 150 runs.

Rapapaksa was dropped twice towards the end, and surely that would come back to haunt Pakistan whenever they would be in trouble in the ups and downs of the run chase.

In the first half, however, Pakistan were totally dominant, restricting Sri Lanka to 67/5. Haris Rauf was the star bowler, claiming three wickets for 29 runs. He would have got a couple of more wickets if the catches were held in death overs.