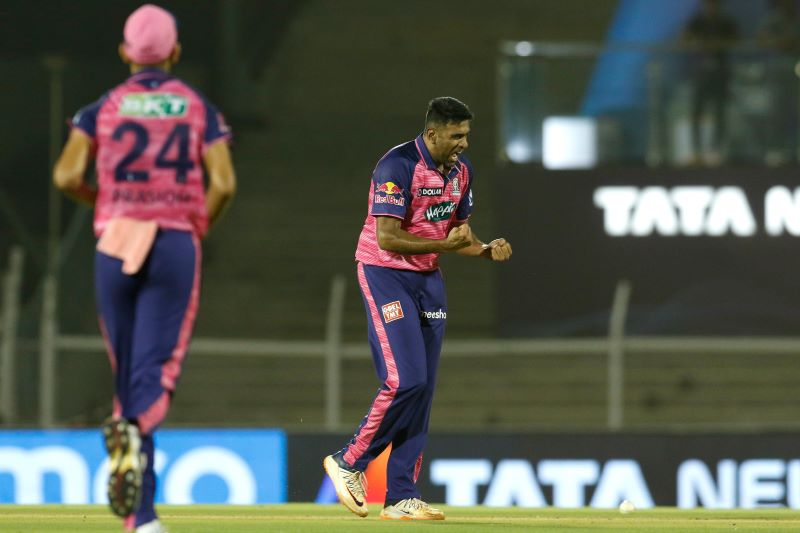 Mumbai/UNI: Ravichandran Ashwin, who was promoted up the order, delivered for Rajasthan Royals with his unbeaten 23-ball 40 runs as his side defeated Chennai Super Kings by chasing down 151 runs target with five wickets in hand.

The win helped RR to climb up to the second spot in the points table in the 68th IPL match at Brabourne Stadium here Friday.

A lot of questions were raised on Ashwin's promotion, but he proved his critics wrong.

He sealed the match for RR by spanking an important six off Mukesh Choudhary in the penultimate over that brought down the equation to seven off the last over. Ashwin then fired a boundary off Matheesha Pathirana and took a single to reduce the equation 1 off 3 balls.

In an anti-climax, the Sri Lankan bowler fired a wide, handing out RR a win.

Yashasvi Jaiswal got RR off to an impressive start, and although they lost Jos Buttler it hardly mattered for the team. Sanju Samson played a below par knock, and so did Devdutt Padikkal.

However, Ashwin demonstrated his value. Besides his fine performance with the ball, the allrounder also coughed up with a significant contribution with the bat.

Jaiswal started off with two successive fours off Mukesh in the opening over and also managed a boundary off Simarjeet, but the CSK pacer struck in the same over as the Englishman tried to work it to the legside but edged it to Moeen Ali at wide slip.

Jaiswal ensured good powerplay for RR as he continued to deal in boundaries while Samson scored a couple of fours, with the CSK new-ball pair continuing to leak runs.

After the powerplay, RR were well placed at 52/1.

A watchful Samson fell after a half-century stand with Jaiswal, before Mitchell Santner got him who took a sharp catch off his own bowling.

Moeen got Padikkal as he struggled to get going and was eventually out for a 9-ball 3, bowled after missing a slog-sweep off the English spinner.

Having reached his fifty in the 14th over, Jaiswal clobbered a six off Prashant Solanki in the 15th over but fell in the same over, pulling it straight to Pathirana at backward square leg. RR were 104/4, needing 47 more off 31.

Shimron Hetmyer started the 17th over with a four but fell the very next delivery, miscuing an attempted big hit.

Ashwin ended the over with a six.

Short deliveries from Pathirana were struck for a four each by Riyan Parag and Ashwin, reducing the equation to 19 from 12 balls for RR.

Opting to bat first, CSK were choked by RR to 150/6 despite Moeen Ali's 93-run heroics. It was a weird innings. In the first two overs, CSK were 2 for 1 and in the next four overs, they scored 72 runs.

In the next 14 overs they could manage 75 runs.

Ruturaj Gaikwad (2) fell early and then a brutal assault from Moeen who cut lose, hammering sixers all over the park. He whacked 6-4-4-4-4-4 in the last over of the powerplay.

Things changed dramatically after RR went for the timeout.

Spinners Rahul Chahal (2/26) and Ashwin (1/28) wrought havoc in the middle overs as they picked up wickets, keeping Moeen starved off the strike. Mahendra Singh Dhoni (26 off 28) joined Moeen in the middle and made sincere efforts to raise the tempo, but boundaries at regular intervals never came by.

Obed McCoy too had an outstanding night that resulted in RR restricting CSK, who at one stage looked like getting to 190 runs mark.

The opening batsman looked to go after a delivery outside off but got an edge and gave Sanju Samson a simple catch. Devon Conway (16 off 14) and Moeen got going.

The New Zealander top-edged a six over fine-leg while attempting a pull of Boult, and whipped one to the leg side for a four in the third over that yielded 12 runs.

Moeen pulled and made room to punch past mid-off for two boundaries, which was followed by a well-timed pull for a six and then struck a four past the bowler.

Ashwin ended up conceding 16 in the fifth over, with Moeen slicing a four through extra cover, striking another over mid-on and then going inside out over cover for two fours and a six.

Moeen brought up the half-century stand by flicking a Boult delivery for a six, followed by a similar shot for a four and another flick fetching from outside off for another boundary, all off successive deliveries.

The next one too he blasted for a four over third man, which helped Moeen bring up a 19-ball fifty, the second fastest ever for CSK in the IPL.

He ended the over with a cover drive for a four with 26 coming off it. CSK moved to 75/1 at the end of the powerplay.

The partnership worth 83 off only 39 ended.

Conway departed for 16 off 14, lbw to Ashwin after missing a sweep off a full delivery.

He reviewed but according to replays it's the umpire's call.

CSK were 85/2 in 8th over. McCoy got N Jagadeesan's (1) wicket of an off cutter which ended up as a low full toss and the batsman chipped it to Parag at mid-off to depart for 1.

No boundaries in the last three overs as CSK moved to 94/3 after 10 overs.

A wicket for Chahal in the 11th over as Ambati Rayudu (3) lunged forward and poked at a delivery that spun away, getting an edge to Devdutt Padikkal at slip held on to a low catch.

Dhoni, meanwhile, got a lucky break as Samson failed to hold on to a tough chance.

CSK rebuilt in the middle overs. It was a quiet phase since the powerplay, with RR sneaking in several boundary-less overs.

CSK went without a boundary for 45 deliveries before Dhoni pulled Chahal for a four in the 15th over. But it was still slow going for CSK who were 120/4 after 16 overs.