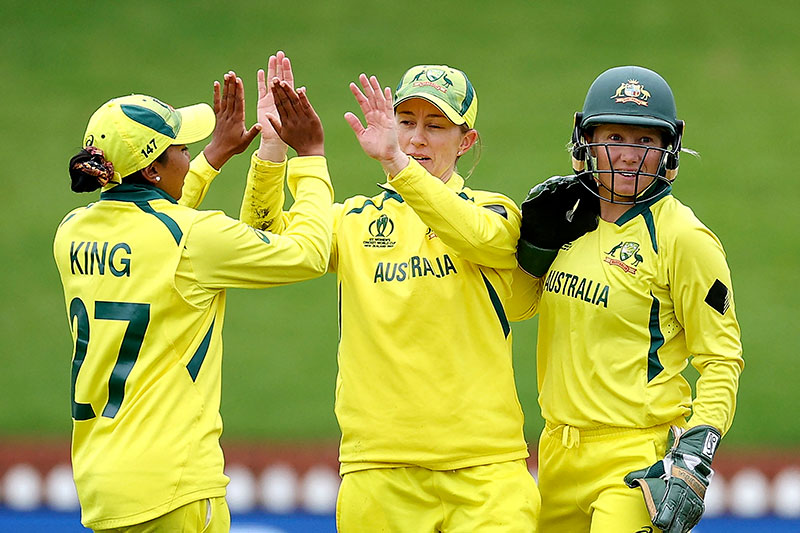 Wellington/UNI: Beth Mooney's fighting knock of 66 not out on Friday ensured that Australia will enter the ICC Women's World Cup semi-finals as the only undefeated side.

In a match that was reduced to 43 overs per side due to overnight rain at Basin Reserve, Australia prevailed in a low-scoring battle against Bangladesh with a five-wicket nervy win to complete their perfect seven straight victories in the group stage.

Australia maintain their unbeaten record at #CWC22 after beating Bangladesh by 5 wickets 👏 pic.twitter.com/JT95qhWJqO

But it was no cakewalk for the world no.1 team.

Australia had to overcome an early scare given by Salma Khatun (3/23) to chase down a modest target of 136.

The off-spinner rattled Australia's top order to reduce the tournament favourites to 26/3 before the ever-reliable Mooney stepped in to rescue and guide her team home.

Khatun had Alyssa Healy caught in the deep for 15 and then produced a ripper to get the big wicket of Australia captain Meg Lanning for a duck on her 30th birthday.

Rachael Haynes (7) and Tahlia McGrath (3) followed shortly, as Australia felt the pressure at 41/4. All-rounder Ashleigh Gardner came and went for a quickfire 13, but Mooney and Annabel Sutherland (26 not out) held their nerves to take Australia over the line with more than 10 overs remaining.

Earlier, Lata Mondal (33) top-scored for Bangladesh as the Asian side posted 135/6 after coping with the windy conditions.

However, Gardner (2/23) struck to dismiss Khatun before the rot set in.

The rock of the Australian innings reaches fifty!

Fargana Hoque (8) was removed by Sutherland (1/22), before Akhter and skipper Nigar Sultana (7) fell to Jess Jonassen (2/13) in quick succession.

Rumana Ahmed (15) combined with Mondal for a 33-run stand and Khatun (15 not out) looked assured at the crease as Bangladesh pushed hard to increase the rate in the late stages of their innings.

But their total was never going to be enough against the mighty Australia.