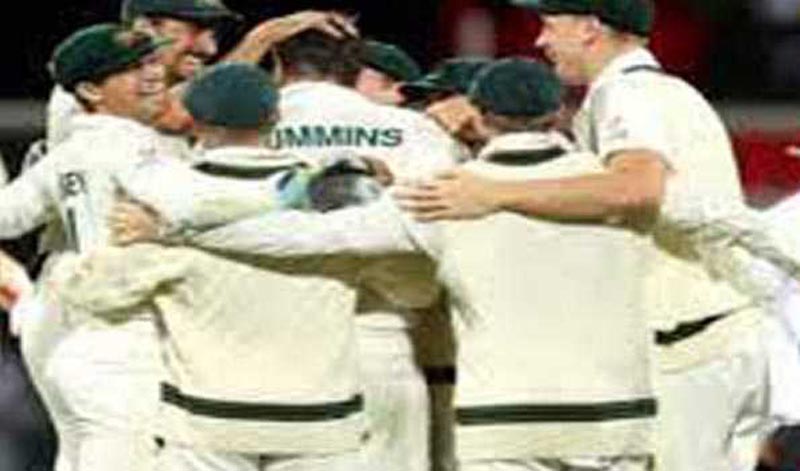 Hobart/UNI: Australia defeated England by 146 runs in the fifth Ashes Test on day three at the Bellerive Oval on Sunday.

Australia were bowled out for 155 and set a target of 271 for England in the final Test. In reply, England were bundled out for 124.

Captain Pat Cummins, Scott Boland and Cameron Green picked three wickets each, while Mitchell Starc got one for Australia.

For England, Mark Wood registered career-best figures of 6 for 37. Stuart Broad picked three wickets, while Chris Woakes got one.

Chasing 271, England openers Rory Burns and Zak Crawley stitched a solid 68-run partnership before Burns departed for 26 off Green's delivery. At the stroke of tea, England were 68/1 with Crawley and Dawid Malan in the middle.

In the final session, Green got Malan for 10 and sent Crawley (36) back to the pavilion. The visitors kept losing wickets at a regular interval and were reduced to 101/5.

Starc dismissed Ben stokes in the 28th over and Scott Boland got captain Joe Root in the 32nd over. Then, none of the players managed to stay on the crease for long as England lost five wickets for 26 runs in four overs.
Boland got Sam Billings (1) and Chris Woakes (5). Cummins dismissed Ollie Pope (5), Mark Wood (11) and Ollie Robinson (0).

Earlier, Wood's five-wicket haul in the opening session kept Australia in check. In the fourth over of the day, Wood dismissed nightwatchman Boland (8). Two overs later, he got rid of the first-innings centurion Travis Head (8).

Alex Carey and Cameron Green added 49 runs for the seventh wicket before Broad had Green ruled out lbw following a review. Wood returned for another spell and completed his five-fer as he had Starc (1) who got caught at short leg.

At the time of dinner, Australia were reduced to 141 for 8 with overall lead of 256.

After the break, Broad denied Carey a half-century as he got him for 49 in the 55th over. Wood bowled Cummins for 13 and the hosts folded on 155.