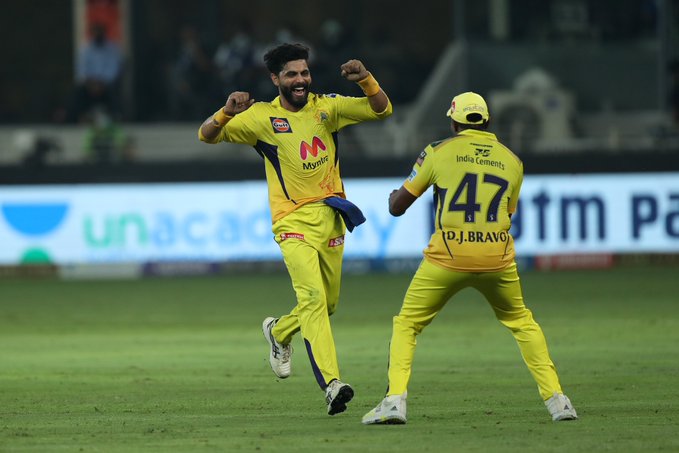 Dubai: MS Dhoni and his golden run for the Chennai Super Kings continued as an all-round performance by the squad helped them beat Kolkata Knight Riders by 27 runs to lift another Indian Premier League title here on Friday.

This is CSK's fourth IPL title.

After posting 192 runs for the loss of three wickets, CSK bowlers displayed sharp skills and Dhoni showed his captaincy efficiency at its best to restrict KKR at 165 for nine after 20 overs.

KKR started their innings on a solid note with openers Shubman Gill (51) and Venkatesh Iyer (50) adding fifty runs individually with their willows.

Shivam Mavi (20) and Lockie Ferguson (18) remained the only two batsmen to add double digit scores for the Kolkata outfit as a batting collapse destroyed all hopes of KKR fans in the middle of the innings.

Deepak Chahar and West Indian Dwayne Bravo picked up a wicket each.

Earlier, Chennai Super Kings batsmen were brutal in their approach as they posted 192 runs for the loss of three wickets against Kolkata Knight Riders.

Faf du Plessis remained dominating in the match as he scored 86 runs by playing 59 balls. He was dismissed in the last ball of the innings as he tried to send the ball out of the park. He was caught by Iyer.

He did not give KKR bowlers a chance to recover and kept on hammering big shots after Dinesh Karthik lost the chance of stumping him early.

Faf hit seven boundaries and three sixes in the innings where he dominated the proceedings.

CSK lost the wicket of Ruturaj Gaikwad  after he added 32 important runs with his willow.

Sunil Narine picked up his wicket to give CSK the first jolt.

However, Robin Utthapa, who once played for KKR, added quickfire 31 runs off 15 balls to keep the scorecard running fast.