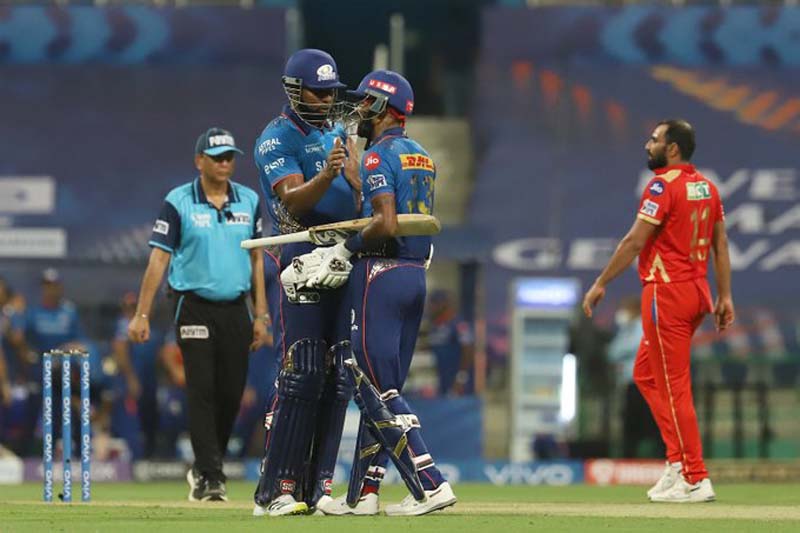 Abu Dhabi/UNI: Defending champions Mumbai Indians tasted victory for the first time in four games as Kieron Pollard’s and Hardik Pandya’s power-hitting defeated Punjab Kings by six wickets with an over to spare in match 42 of IPL 2021 here on Tuesday.

Pandya (40* runs off 30 balls) and Pollard (15* off 7) fired 45 runs for the fifth wicket while chasing 136 after the West Indies all-rounder also starred with the ball. During his 2/8 spell, Pollard hunted down KL Rahul and Chris Gayle to break the PBKS batting backbone.

PBKS might have to suffer heavy consequences for the defeat as they have just eight points with three games left; shrinking their path to the top four or play-off stages. MI, on the other hand, have got the ideal win as they go fifth in the table with 10 points and are separate from fourth-placed Kolkata Knight Riders by the virtue of a slower run rate.

MI’s chase though wasn’t that ideal as the defending champions were reeling at 16/2 by the fourth over. Bowling for the first time in the powerplay, Ravi Bishnoi did double damage off consecutive deliveries. The 21-year-old wrist-spinner first had Rohit Sharma (8 off 10) caught on mid-on before disrupting the wickets of Suryakumar Yadav with a googly.

However, Bishnoi was taken off the attack after an over spell while allowing in-form South African opener Quinton de Kock and no. 4 Saurabh Tiwari to bail MI out of immediate trouble. The duo felt less discomfort against other PBKS bowlers and added 46 runs for the third wicket. The partnership was ended by Mohammed Shami, who bowled De Kock (27 off 29) of an inside edge.

His partner Tiwari went on to score 45 runs after a 31-run fourth-wicket stand with Hardik Pandya, allowing MI to post 92 runs in 15 overs. The southpaw was removed at the beginning of the next over by Nathan Ellis with MI still needing 51 runs in less than five overs.

However, with two power-hitter at the crease – Bumrah and newly-in Kieron Pollard – little bothered MI dugout. The duo smashed 31 runs in the 18th and 19th over combined to seal the win for the five-time champions.

Earlier batting first, PBKS had to tweak its opening pair as KL Rahul saw a new partner in Mandeep Singh with Mayank Agarwal declared unfit. The new pairing added 36 runs for the first wicket, laced with four boundaries before Krunal Pandya picked the scalp of Singh (15 off 14) in the sixth over.

The dismissal triggered a top-order collapse with the next three wickets falling in a space of 12 runs. Two of the dismissal came in the seventh over when Kieron Pollard had fellow West Indian Chris Gayle (1 off 4) at long-on, followed by a big scalp of Rahul (21 off 22).

Further trouble found the Northern outfit in the next over when Jasprit Bumrah trapped Nicholas Pooran (2 off 3) lbw with PBKS scoreboard reading 48/4.

With two new batsmen in the middle, PBKS did manage to pull themselves out of chaos despite MI bowlers coming hard at them. Aiden Markram, who has had a good start in the season earlier but failed to capitalize on them, looked in great touch and struck three boundaries in the next three overs.

This allowed Hooda to settle down on the other end with the duo firing the side past 100 by the 15th over. Markram, being the aggressor, shot six boundaries during the 61-run stand while Hooda shot a solitary six.

However, things took a turn for worse again as Markram got bowled by Rahul Chahar in the 15th over after scoring 42 runs in 29 balls. Upon his dismissal, no boundaries came off a PBKS bat in the remaining 22 delivery as MI pacers tightened the screw on Deepak Hooda and PBKS tailenders; giving away just 27 runs.