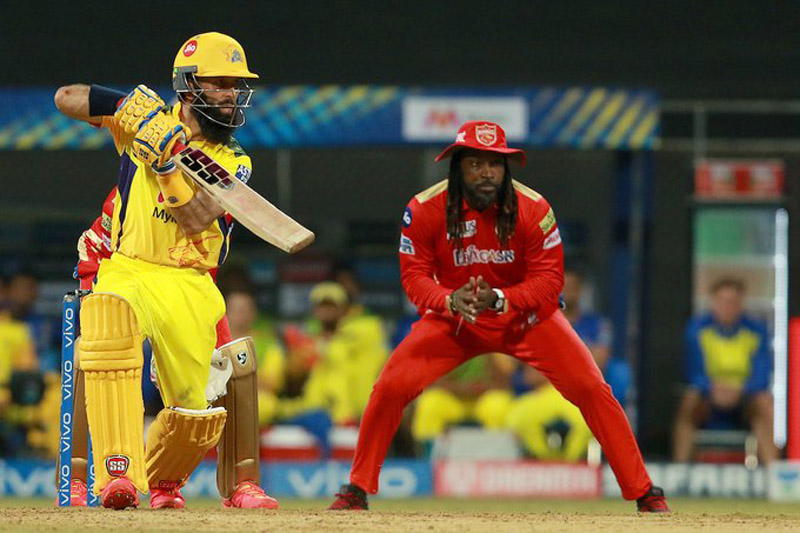 Mumbai/UNI: Chennai Super Kings bounced back in style and thrashed Punjab Kings by six wickets to register their first victory of the IPL 2021 at Wankhede Stadium, here on Friday.

Chasing a small target, CSK didn't have a great start as Arshdeep Singh dismissed struggling Ruturaj Gaikwad (5) early. However, Moeen Ali (46 off 31) put on 66 runs for the second wicket with opener Faf du Plessis (36* off 33 ) took CSK closer to victory.

When Moeen got out in the 13th over, CSK needed just 17 more to win. But, CSK lost the wickets of Suresh Raina (8) and Ambati Rayudu (0) to Mohammed Shami (2/21) in consecutive balls in the 15th over.

In the end, Sam Curran (5 not out) hit the winning runs as CSK chased down the paltry target in 15.4 overs to register their first win of the 14th season.

Mohammed Shami was the pick of the bowlers for Punjab with figures of 2/21.

Nicholas Pooran, who came to bat next, also couldn't do much and bagged his second straight duck,

Deepak Hooda (10), the hero for Punjab in their last match could not repeat his success gave a

a simple catch to Faf du Plessis as the team slipped to 26 for five in the seventh over.

Shahrukh Khan and Jhye Richardson (15, 22 balls, 2x4s) added 31 runs for the sixth wicket in what was the best partnership of the innings.