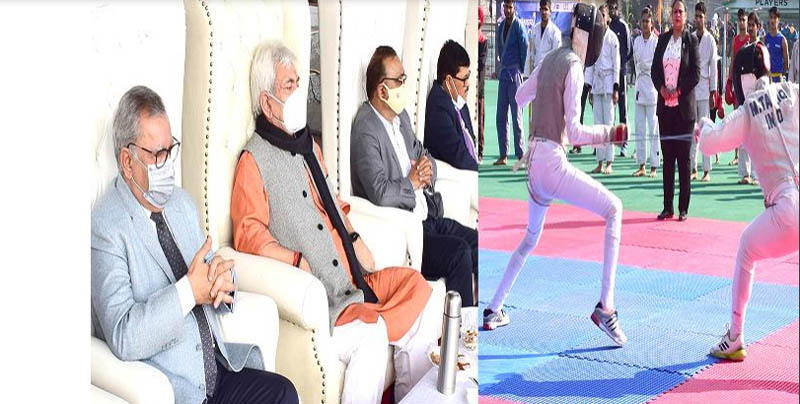 “The UT Government is taking innovative measures to overhaul the sports ecosystem of J&K, ensuringmodern sports infrastructure coupled with world class training for the young sporting talent to makeJ&K a sporting power house,” the LG said after declaring open the Premier League in Jammu at K.KHakku Stadium.

The Lt Governor congratulated the sports department, coaches and family members of thesportspersons and said that J&K is perhaps the first to organize 1250 matches across all the districts infour different disciplines – Football, Hockey, Volleyball and Kabaddi.While underscoring concrete measures taken by the UT Government for the holistic development of thesports sector in J&K, the Lt Governor observed that for the past few months, the Government has been making untiring efforts for paving a strong foundation for the development of all sports disciplines,sporting infrastructure and allied activities in the UT.

Rs 200 Cr under the Prime Minister’s Development Package has been sanctioned for upgradation ofsports infrastructure and encouragement of budding talent in the field.

Another Rs 30 crores have beensanctioned by the Government for boosting sports infrastructure, training facilities and providingprofessional coaches to hone the local talent, the Lt Governor maintained.

For promotion of sports at the grass-root level, elected representatives of Panchayats have been ropedin and all the Panchayats have been provided with sports kits worth Rs 20,000 each during the recentlyconcluded Back to Village-3 programme as per the local requirements, he added.

The Lt Governor observed that all 20 districts of J&K have been given approval for Khelo India StateCentres of Excellence. All Centres will be connected with former champions of the Union Territory.

In the first phase, 40 such Centres of Excellence will be established and later it will be increased to 120. Itwould ensure that the talented young sports person can take maximum benefit from the experience offormer champions of the UT.

The data shows that Jammu and Kashmir has a strong and advanced sports infrastructure than any otherstate or UT of the Country, he added.

In addition to the new infrastructure, the Lt Governor said that efforts are afoot to bring qualitativechange in the existing facilities.

The Lt Governor assured the sportsperson of Jammu and Kashmir of all the requisite facilities so thatthey can also make the UT proud like Bavleen Kour, Suvidha Saran and Shivani Charak.

The Lt Governor also interacted with the players and asked them for maximum utilization of theopportunity to showcase their talent and wished them a successful sporting career ahead.

He said thatthe District Premier League is just the beginning; the same will be organized at the Divisional level.

Thisis the first and important step towards your aim and dreams, he added.Speaking on the occasion, Farooq Khan, Advisor to the Lt Governor, said that the J&K Government isembarked on an ambitious mission to achieve holistic development of sports in the UT.

To achieve thedesired results, innovative measures have been taken for the development of the sports sector in the UTby ensuring modern sports infrastructure, he added.

During his welcome address, Sarmad Hafeez, Secretary to the Government, Youth Services and SportsDepartment highlighted the key initiatives taken by the Department for promoting sports activitiesacross the UT.

A Hockey exhibition match was played to mark the day. Cultural activities were demonstrated, besidesongoing premier league match pictures were displayed on the occasion.

Vote of thanks presented by Dr.Naseem Javaid Chowdhary, Secretary J&K Sports Council.It was informed that similar Premier League in 12 Sports Disciplines shall be organized in the nextfinancial year to provide a platform to the youth of the UT J&K to showcase their talent.Prominent among others present on the occasion were Dilbag Singh, DGP, Bishwajit Kumar Singh,Administrative Secretary, School Education Department, and Officers of J&K Sports Council.