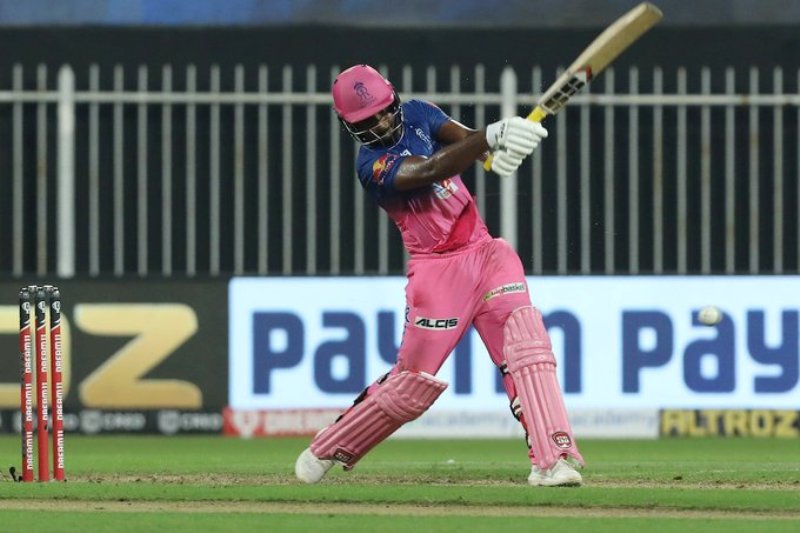 Sharjah/UNI: Mayank Agarwal's excellent century went in vain as Rajasthan Royals chased down a record breaking target of 224 runs, beating Kings XI Punjab by 4 wickets in the ninth match of IPL 2020, here at the Sharjah Cricket Stadium on Sunday.

Excellent century knock from Mayank Agarwal (106 off 50 balls) and half century from skipper KL Rahul (69 off 54) propelled Kings XI Punjab score to mammoth 223/2 in 20 overs after being sent in to bat first by Rajasthan Royals captain Steve Smith who won the toss and opted to bowl first.

In response, Sanju Samson (85 off 42) and and Rahul Tewatia (53 off 31) starred for Rajastan Royals and helped the team chase down a record breaking target of 224 runs at the iconic Sharjah Cricket Stadium on Sunday.

This is the highest-successful chase in IPL history, surpassing the previous highest chase of 216 registered by Rajasthan Royals against Deccan Chargers in the inaugural season in 2008.

Chasing a mammoth target for victory, Steve Smith (50) and Sanju Samson gave Rajasthan Royals a cracking start after Sheldon Cottrell got the wicket of Jos Buttler early. The duo scored 69-1 in 6 overs, highest powerplay score of the season.

Both Smith and Samson kept on hitting boundaries and took Rajasthan Royals to 100 in the 9th over.

During the process, Smith also got to his half-century.

However soon, Jimmy Neesham dismissed Smith (50 off 27 balls) to break the 81-run stand for the second between Smith and Samson.

On the other, Sanju Samson slammed consecutive fifties to keep Rajasthan Royals in the game.However, Rahul Tewatia, who was promoted to No 4 didn't looked in great touch.
Samson was playing a lone hand to take his team to a miraculous win before getting out to Shami for 85 off 42. Robin Uthappa came to bat next, with RR needing 62 off 22 balls.
From there on, Rahul Tewatia took charge smashes 5 sixes in Sheldon Cottrell's over (18th over). The 30-run over was the turning point of the match as 21 runs were needed off 12 balls.

Uthappa got out for 9 after 18.1 over with, RR need 21 off 11 to win. Jofra Archer, who came to bat next hit consecutive sixes, taking RR closer to the victory.

Rahul Tewatia got out in the last ball of the 19th over, but the game was almost done n dusted till that time.

In the end, Tom Curran hit the four as Rajasthan Royals win by 4 wickets with 3 balls remaining. They pulled off the highest successful run chase in IPL history.
Mohammed Shami 3/53, Sheldon Cottrell 1/52, James Neesham 1/40, Murugan Ashwin 1/16 were the wicket takers for KXIP.