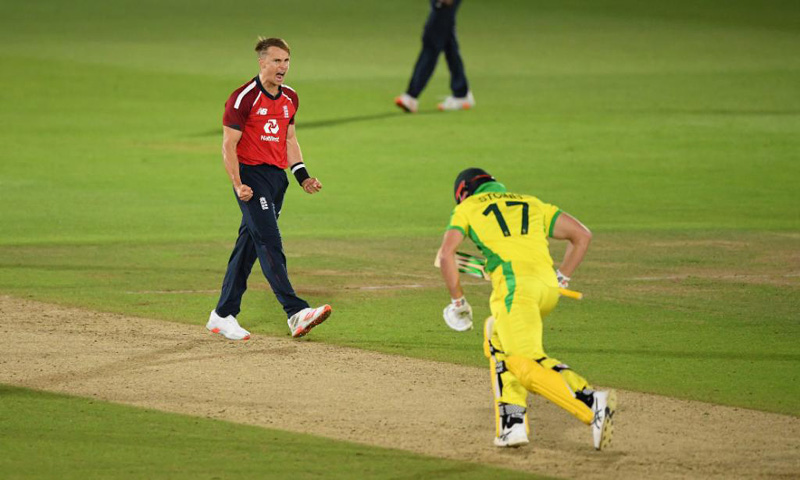 Southampton/UNI: England thrashed Australia by two runs in the first of the three-match T20I series at The Rose Bowl here on Friday.

England lead 1-0 in the series.

Ashton Agar bounced back from his first over being taken for 16 by Buttler, to dismiss the explosive opener for 44 to begin a period of Australian dominance after England had put on 55/1 in the Powerplay.

Other than Buttler and Malan, only Chris Jordan got to double figures, hitting 14 from 8 balls in a late cameo.

Through the middle overs though, the work was left mainly to Malan, who registered his eighth score of fifty or more in his 14-match T20I career. The No 3 also provided vital late impetus to England's innings by hitting Adam Zampa for back-to-back sixes in the leg-spinner's last over.

Australia looked on track to coast to victory thanks to Finch and Warner's early dominance, with the pair adding 98 runs in 11 overs before the Australia captain was caught at mid-off off the bowling of Jofra Archer.

Steve Smith looked fluent as he scored 18 off 11 balls, including two fours and a six, but Adil Rashid had him caught sweeping and then dismissed Maxwell four balls later as England fought back.

The pace of Archer and Mark Wood gained England another two quick wickets as Warner and Alex Carey were both clean bowled to complete a collapse of four wickets for nine runs, with the visitors still needing 30 from 21 balls.

Tom Curran managed to prevent Marcus Stoinis or Agar from finding the boundary in the 18th over before Jordan produced a sublime over under pressure, conceding just four singles and running out Agar with an athletic piece of fielding.

Dawid Malan was adjudged Player of The Match for his brilliant 66 off 43 which included 5 fours and 3 sixes.