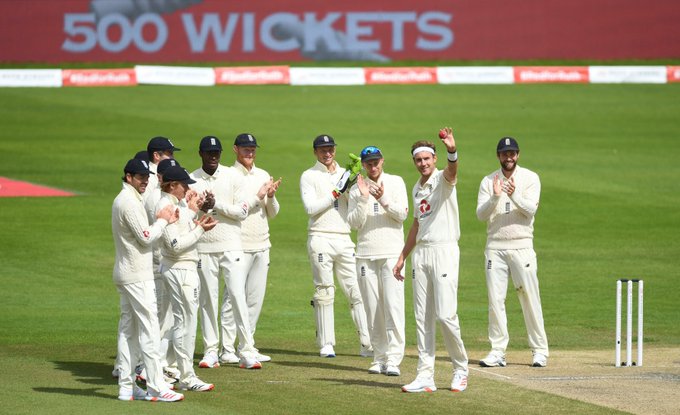 Manchester/UNI: West Indies were 84/5 at lunch on day 5 of the deciding Test of second innings against England at Old Trafford on Tuesday.

Earlier, on day 3 of the final session England declared second innings at 226/2 setting a target of 399 runs before the visitors.

While day 4 was washed out due to rain without a ball being bowled.

Resuming with an overnight score of 10/2 Brathwaite and Shai Hope continued on day 5, but Brathwaite was lbw in the morning session in Stuart Broad's spell. Broad reached 500th Test wicket became just the seventh bowler to reach the landmark.

The only bowlers with more than 600 Test wickets are a trio of former spinners -- Sri Lanka's Muttiah Muralitharan (800), Australian Shane Warne (708) and India's Anil Kumble (619).

The only seamers ahead of Broad are his long-time England new-ball colleague James Anderson (589 wickets) and Australia's Glenn McGrath (563) and the West Indies' Courtney Walsh (519), both of whom are retired.

Windies lost third wicket at 45. Brathwaite scored 19 off 44 with 3 fours.

The visitors lost their fourth wicket at 71 in form of Shai Hope when Wokaes picked his wicket caught by Broad. Hope 31 off 38 with 6 fours.