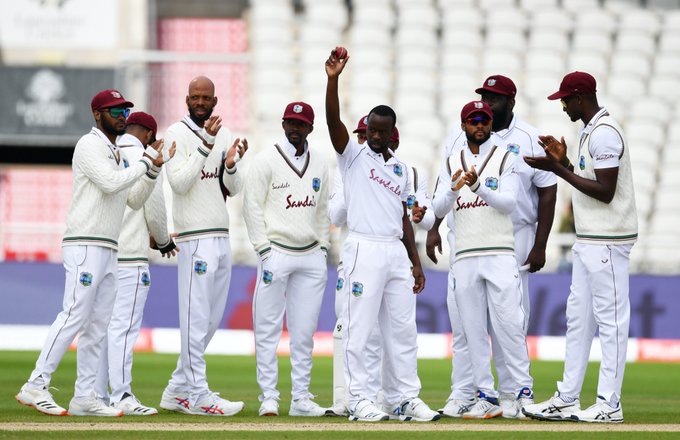 Day 2, 3rd Test: Windies bundle out England for 369 before Lunch

Manchester/UNI: West Indies bundled out England for 369 before Lunch in the first innings on day 2 of the decider Test at Old Trafford on Saturday.

Resuming with an overnight score of 258/4 Pope 91 and Buttler 56 continued on day 2, but Pope fell victim without scoring any runs to Gabriel early in the morning session in 89.1 overs. England's fifth wicket fell at 262.

After Pope wickets kept falling for England in form of Chris Woakes bowled by Roach at 1 claiming his 200th Test wicket becoming the first West Indian to reach the landmark since Sir Curtly Ambrose back in 1994.

After Woakes Buttler who completed his half century was going great but Gabriel picked his wicket. England's seventh wicket fell at 272.

After Buttler Archer too fell at 3 bowled by Roach. England's 8th wicket fell at 280.

There was some healthy partnership of 76 runs between Broad and Bess for the ninth wicket, but then Broad was victim of Chase.

England's lost six wickets in a span of 111 runs, the bulk of them coming in the form of a glorious throwback knock from Stuart Broad, who ticked up a 33-ball fifty becoming the fifth fastest batsman for England after Ollie Pope and Jos Buttler had fallen early in the session.

England's last wicket fell in form of Anderson at 369 who scored 11 off 17 with one four.
Bess remained unbeaten at 18.

Those breakthroughs came in the midst of a thrilling first-hour onslaught from Shannon Gabriel and Kemar Roach, who racked up his 200th Test wicket in the process.