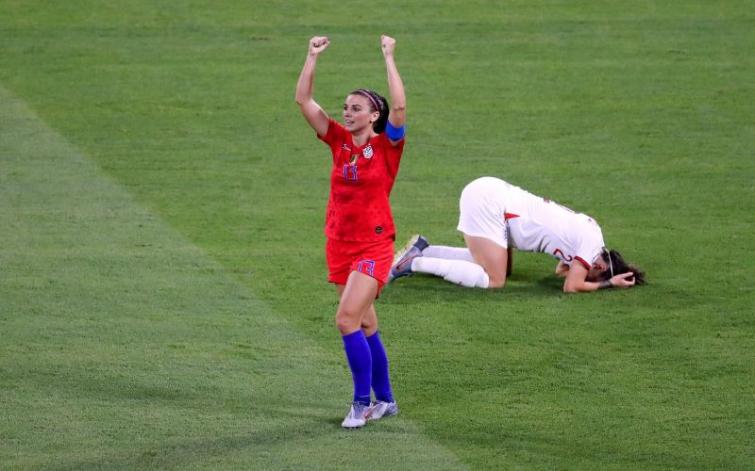 "We've come to this tournament and done our very best, we've not left anything in that dressing room, and I've told them there should be no tears tonight. We should be proud," he said.

"We've touched the hearts of the nation back home, and they've left their hearts on that football field. So I'm happy," added the former Manchester United and Everton player, who took charge of the women's side 18 months ago.

The Lionesses were down to 10 players in the 86th minute after Millie Bright, who flied to a frustrated challenge on Alex Morgan with her foot over the ball before catching the U.S. captain, was sent off on a second yellow.

White, who scored England's first goal before the interval, could have equalized it again after taking a touch on Jill Scott's through and slotting it in on 67 minute, but a quick VAR review disallowed it for one-foot offside.

It's also the VAR, however, that awarded England a penalty at 83 after White claimed that Becky Sauerbrunn caught her on the back of her foot inside the box before she's half step late for a shot.

Brazilian referee Edina Alves Batista spent a long time looking at the footage on the monitor and came back to point to the spot.

Skipper Steph Houghton stepped up as Nikita Parris had missed England's last two penalties. She aimed it low towards the bottom corner, but the U.S. goalie Alyssa Naeher went the right way and caught the ball.

"Obviously I'm devastated not to get to the final," White told a post-match mixed zone while taking a moment to wipe away the tears. "But all I feel is pride, proud of my teammates."

"The US had an amazing match, we couldn't quite match them. I'm disappointed about the one that was offside. But I wish the US the best of luck in the final," she said.

In the first half, White's goal canceled the U.S.'s early lead through Christen Press, but birthday girl Morgan's header at half-hour mark again put the defending champions ahead.

The three-time title holders opened the scoring just 10 minutes into the semifinal after a brilliant through ball from Tobin Heath picked out Kelley O'Hara down the right wing and the latter put a deep cross into the box.

Press, who started in the place of the Americans' co-captain Megan Rapinoe, rose at the back post to fire her header into the back of England's net.

With Press' goal, the U.S. have scored in the first 12 minutes of every game they've played so far in this World Cup.

England, however, equalized through their first real attack just nine minutes later when Beth Mead crossed it into the box ahead of all the defenders and White just had to tap the ball past Alyssa Naeher and over the line.

It was not until one minute past the half-hour mark that the U.S. reclaimed the lead as Lindsey Horan chipped her cross into the middle of the box and Morgan headed in her sixth goal of the tournament.

The 30-year-old Morgan thus became the first player in the Women's World Cup history to score a goal on her birthday and shared the pole position with White on the top scorer leaderboard.

Rapinoe, who started in four of the U.S.'s first five games, was not in the starting lineup for Tuesday's semifinal. She netted two goals against France in their 2-1 quarterfinal victory last Friday.

"I can't express how proud I am. It was such a great effort. We had some challenges in terms of bodies, and everyone stepped up, and that's what this team are about," said the American coach Jill Ellis after the match.

"Stay humble, we've got one more (game)," she added, referring to the final here on Sunday.

With Tuesday's victory, the U.S., who lifted trophy of the quadrennial event in 1991, 1999 and 2015, reached the final for the third consecutive World Cup and will have to wait until Wednesday to find out if they will be facing Netherlands or Sweden.

England were knocked out at the semifinals for the second tournament in a row but have the opportunity to finish third again in the play-off match in Nice on Saturday.