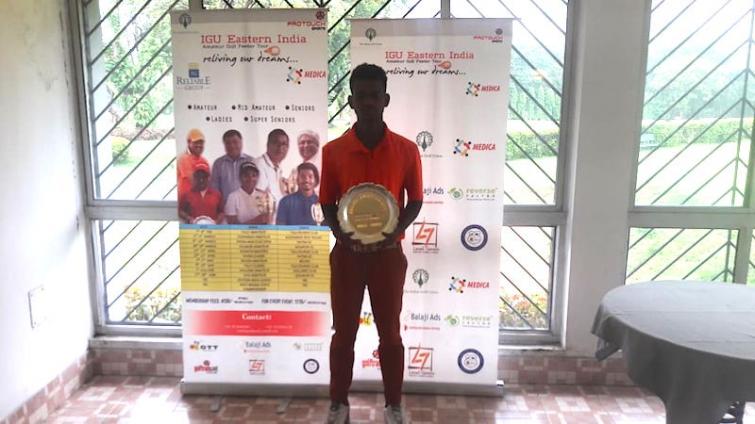 Kolkata, May 3 (IBNS): Khokan Molla produced an amazing resurgence in the final round to clinch the title at Beldih Amateur 2019. He bettered his first round score by a whopping 12 shots as he shot a level par 72, in contrast to his first round score of 84, overall 154 to conquer the greens at the Beldih Club by just one shot margin.

Quite fascinating is the fact that he made this superb comeback effort to secure his first ever title in the Amateur golf.

The final round started with an overcast condition with it starting to rain as the play progressed. At one point it was pouring and play had to be halted for 15 minutes. Golfers had a tough time judging the wind direction and speed of the green, but Khokan was at ease. When golfers were struggling to post a respectable score, Khokan produced a level par round which was five shots better than the second-best score today, the runner-up Aditya Panchamiya posted a seven over 79 to finish at the second spot. Souvik Nayak with his 80 finished third. The overnight Bimal Singh Sardar leader had to be satisfied with a fourth spot as he had an uncharacteristic round of 83 today.

This win will see Khokan jumping several steps up in the order of merit to second position. The leader Bimal Singh Sardar remains undisturbed at the first position. After the round today, the winner Khokan Molla who is, unfortunately, struggling to get a sponsor, said: "No words to describe how I am feeling right now."

When asked about how he feels about his game his reaction was quite astounding. He said: "I am still not satisfied with my long game, need to work on more as I have a target set."

He will next be seen in the Tolly Classic to be held on May 9-10 at Tollygunge Club.

In Super-Senior, Subroto Kundu tasted the victory and in Mid-Amateur Dilip Tirkey won the title.