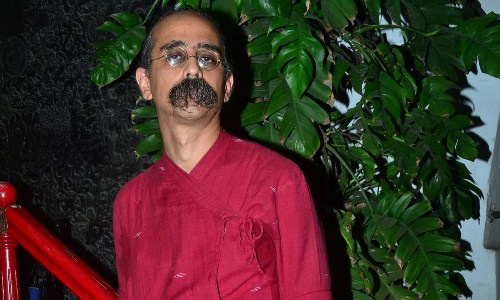 The 102-minute film revolves around the middle class perception of the truth of life by a group of thirteen individuals among which six are newlywed couples.

This is a single shot film where the camera is on a circular dolly moving on around the shot, focusing on the views of each members of the group.

The circular movements of the camera creates a grim atmosphere almost captivating painstaking subconscious minds of the audience. The director said, “We have experimented with cinematography in this film to reach the depth of Bengali culture now and then. The film is about the idiosyncratic style of Bengali thinking.”

The film has been inspired from Leonardo Da Vinci’s ‘The Last Supper’ where the initiative of union by the couples is coiled by the impending climax for the idealistic realization of the modern-day Indian life.

‘Rati Chakravyuh’ presents before the audience the ingredients of freestyle conversation between Bengalis that touches love, sex, car, cricket, violence, Gods and Goddesses and death . “The whole film is political, politics is there at every corner of the film,” said the Director.

The continuous shot highlights the transitory nature of the film. A story where six newlywed couples come, chat and put an end to their lives discovering the impermanence and futility of life.

"I have not selected young castes just because the story demanded it, but because they were good actors, said the director. The dialogues follow the theatrical delivery. Even the actors have been picked up from theatrical background.

“The film is not focused in a particular section of audience, it touches the mindsets of all human minds,” demanded the director.

(Photo: Ashish Avikunthak before the premiere)