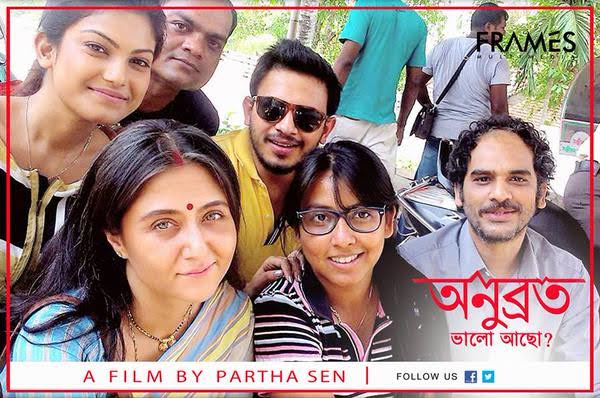 India Blooms News Service | | 31 Jul 2015, 11:58 am
#Anubrato Bhalo Achho, # cancer patient , # Ritwik Chakroborty, # Swastika Mukherjee, # Partha Sen
Kolkata, July 31 (IBNS) Director Partha Sen says his upcoming film Anubrato Bhalo Achho, starring versatile actors Ritwik Chakroborty and Swastika Mukherjee, deals more with the psychological effect on a patient and his close ones when diagnosed with cancer.
"I sought to probe the psychological impact on the protagonist more than the external changes as the ailment advances. How the world comes crashing down on the family and friends once the ailment is diagnosed and days progress," Patho, whose film fetched two awards in Madrid and Queensland film festivals, tells IBNS on the trailer launch event of
the film.

"It's like irrespective of the nature of illness once the deadly disease is confirmed, the patient slowly becomes resigned to the approaching death. Anubrato's stoicism is the USP of the film," Partho says.

"In fact in a surreal level we all are Anubratas in some way or other in this society. We all wish to live a life of wishfulfilment where all the good things happen. We are incredible when faced with some unacceptable reality and can't fathom how to come out of our own comfort zones in the changed situations. This is an aspect of urban life," Partho, having made acclaimed telefilms and serials in past,says.

Still basking in the adulation for her role as Angoori Devi in Bollywood film Detective Byomkesh Bakshi, Swastika Mukherjee says she is doubly happy as both the lead actors in Anubrato, she and Ritwik, got the best actor laurels in two premier global film festivals (Ritwik in Madrid and Swastika in Queensland).
"I need to share one fact. During my shoots people commented I actually looked the way I am portrayed in Anubrata, a worn-out, fatigued person in her middle age and the other page three pictures of me were all fake, with exaggerated make-up. I take this as a compliment," Swastika says referring to her shoots in a real life hospital.

Partho says, "It was truly real life. With all the medical equipment and other devices used to recreate a scene in an entire ward of a premier private hospital."

One of the doctors of the hospital says, "More than oncological treatment a cancer patient deserves empathy and care which can alleviate his/her pain. That is called palliative care and we chipped in as the film can be a glorious example to spread awareness about palliative treatment for cancer besides core treatment."
Produced by Frame Multimedia, Anubrato Bhalo Achho will be released soon.
Related Images