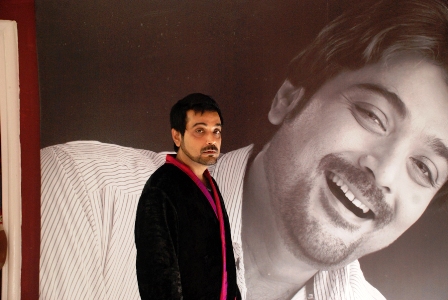 In a felicitation programme of leading theatre personality Rudraprasad Sengupta at 'Monologues', the matinee idol says: "While the earlier practice of holding evening shows of commercial theatres on Thursday and Saturday is no more viable in the present socio-economic conditions, the group theatre shows are witnessing higher footfall."    "Think about the theatre of Bratya (Basu) and Baban (Kaushik Sen) which are making waves. Think about the works of Debesh (Chattopadhyay). Yes I squeeze out time from my schedule to watch the performances," Prosenjit tells IBNS after conferring honour on Rudraprasad Sengupta, the live wire of Nandikar.     Hinting that he will be back on stage in foreseeable future, Prosenjit, having turned up in around 280 films, recalls he had his stints in theatre.     "In 'Rangmahal' I had appeared in stage for six months on trot at the request of the authorities years back. The play 'Gourab' by Asit Ghosh had seen houseful boards in every show. And I had managed that despite working in three shifts," he says when asked if he will be back on stage to effect a turnaround of Bengali commercial theatre like Uttam Kumar did for Star Theatre.   Rudraprasad says his felicitation in the Monologues show will encourage solo artistes on stage.    Monologues, curated by Sujoy Prasad Chatterjee, began in 2012 and have hosted legendary artists like Chapal Bhaduri, Saoli Mitra, Bijoylakshmi Barman, Mahabanoo Modi Kotwal, Mita Vashist among others.