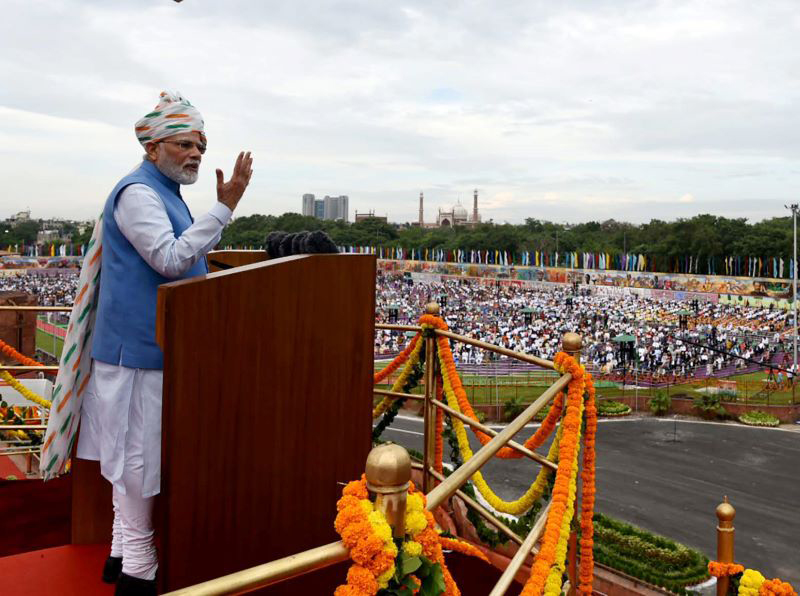 New Delhi/UNI: Recalling the sacrifices made by Indian freedom fighters, Prime Minister Narendra Modi Monday said "Bharat" is the "mother of democracy" and this has been proven innumerable times as she faced multiple challenges during her journey of 75 years.

Addressing the nation from the ramparts of Red Fort, the Prime Minister said that India has seen many ups and down through these years but sailed through due to its diversity and democratic nature.

"What have we not suffered? We faced food crisis, we became victims of war,... terrorism has created many challenges, innocent civilians were killed, the proxy war continued, natural disasters kept coming.

"We saw many ups and downs. But amid all this India continued to move forward. India's diversity is its power," the Prime Minister said.

He said that the world did not know that India had an inherent strength and that strength is democracy.

"India is the mother of democracy. When democratic minds walk with determination, then their power brings trouble even to the big sultanates of the world. This mother of democracy, this India has proved that we have a priceless potential," he added.

Calling the occasion a historic one, the Prime Minister hailed all those freedom fighters to make this independence possible.

"We are grateful to Gandhiji, Bhagat Singh, Rajguru, Ramprasad Bismil, Rani Laxmi Bai and all other freedom fighters who shook the foundations of the British Empire.

"During the movement, there was not a single year where our freedom fighters did not face brutality and cruelty. Today is the day when, as we pay them our respects, we need to remember their vision and dream for India," he said.

The Prime Minister also recalled the contribution of tribal warriors like Birsa Munda, Tirot Singh and Alluri Sitarama Raju who played pivotal role in keeping the freedom struggle alive in every corner of India.

He said that India is an aspirational society where changes are being powered by a collective spirit.

"India is an aspirational society and such a society is an asset. The people of India want positive

changes and they want it at a quick pace. They also want to contribute towards it," he said.

The Prime Minister spoke of five core areas of focus in the next 25 years, calling "praan shakti" (source of life force).

He said that for the next 25 years the country needs to focus on the five resolves to make "Viksit Bharat" (developed India) by removing every ounce of slave mentality, finding pride in our glorious heritage, unity and fulfilling our duties.

Every trace of slave mentality has to be erased by making India "aatmanirbhar", the citizens need to unite and the nation will then be unstoppable if we focus on these five areas, he said.