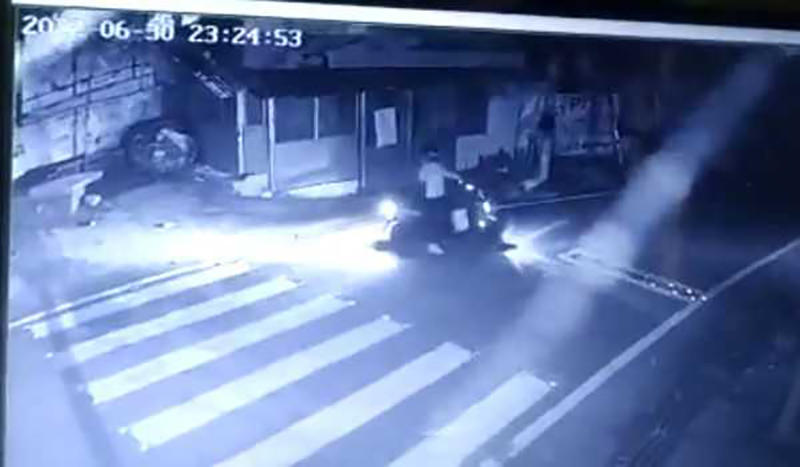 Thiruvananthapuram/UNI: A low intensity bomb was hurled at the AKG Centre, the headquarters of CPI-M in Kerala, at 11:45 pm Thursday.

According to the sources, "the assailants came in two wheelers and one who was riding a scooter hurled the bomb which stuck the main gate leading to the office. No one was injured in the incident."

The attack happened when several CPI-M leaders including PK Sreemathy were in the building.

Policemen who were on duty in the area and party men rushed to the spot after hearing a huge sound due to the explosion.

Soon after the blast, the assailants fled the spot.

Police began a search operation to nab the culprits and a large number of police personnel was deployed in the area to avoid any untoward incident.

After the incident, hundreds of party workers reached the AKG Centre and staged a protest march to the government secretariat demanding the arrest of culprits.

On Jun 24, Members of Students Federation of India (SFI) vandalised Congress leader Rahul Gandhi's office in Wayanad, protesting against his silence on the buffer zone issue.

This was followed by an 'in-flight' protest against Chief Minister Pinarayi Vijayan by two Youth Congress workers.

The state-wide attack incidents were reported after the two Youth Congress men staged the protest inside the Kannur- Thiruvananthapuram flight, in which Chief Minister Pinarayi Vijayan was travelling from Kannur to Thiruvananthapuram.

CPI-M workers pelted stones on KPCC office and destroyed flex boards erected in front of the office when AK Antony and a few other Congress leaders were inside the building.

On Sept 7, 2016, the BJP State head office in Kerala also came under bomb attack allegedly by the CPI-M.

'Congress has no role'

The Congress party has no role in the bomb attack on AKG Centre, the CPI-M headquarters in Kerala, Opposition leader in State Assembly VD Satheesan claimed Friday.

Talking to news persons here, the Opposition leader who condemned the attack demanded a police probe into the incident based on the CCTV visuals received from the AKG Centre.

The attack on the day of Congress MP Rahul Gandhi's visit to Kerala is aimed at playing spoilsport to the Congress party's protest programmes in the State on Friday, he alleged.

UDF Convenor MM Hassan alleged that the CPI-M is behind the attack on their own party office to divert public attention from Rahul Gandhi's office attack and the diplomatic baggage gold smuggling case.