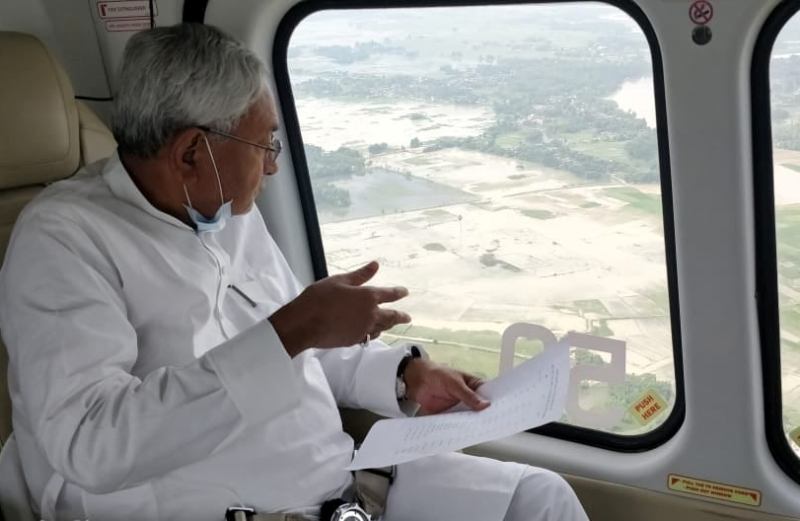 Patna/UNI: Bihar Chief Minister Nitish Kumar on Tuesday assured that relief would be provided to the people affected due to the recent heavy downpour.

After conducting an aerial survey of Vaishali, Muzaffarpur, Sitamarhi, Sheohar, East Champaran, Gopalganj and Saran districts during the day, Kumar told newspersons here that following heavy downpour in various districts of the state the authorities concerned have been asked to make an in-depth assessment of the affected areas.

Kumar said a high-level meeting would be held here this evening to review the situation and assured to provide all sorts of relief to the affected people.

Referring to the survey he had conducted in Patna, Nalanda and Nawada districts on Sept 2,  Kumar said standing crops were damaged due to incessant rain and at several places cultivation could not be taken up in the wake of flood.

The chief minister said all situations and cases would be examined carefully to provide adequate relief.

He said the minister in charge of the concerned districts has already assessed the situation with the public representatives.

Replying to byelections being held in two Assembly seats, Kumar said the NDA was strongly vying for both the Assembly Constituency seats which were won by the JD( U) and maintained that the people would be taking the final decision during the polling.

Kumar said he was not in the habit of making tall claims and informed that the NDA collectively decided about the candidates who filled their nominations during the day.