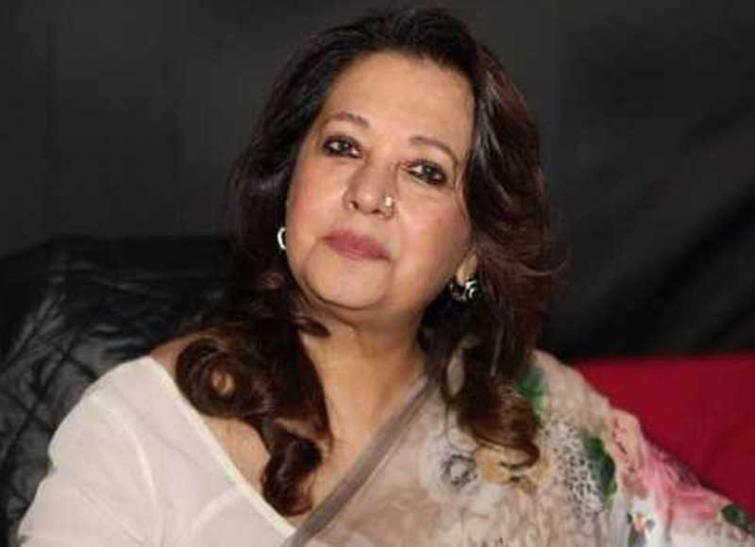 Asansol (West Bengal), Apr 20 (UNI) The word about it had spread a few hours ago. A mixed crowd of youth - most seemingly Trinamool Congress enthusiasts and others still favouring Narendra Modi had gathered at Barabani for a roadshow for Moon Moon Sen.

But the scene on Friday evening was different. It is more of a glamour show and what the film star wore during her portrayal of different characters in the films and how does she look now.

Sen has been Tollywood's -- Bengal's film world's -- one of the very few actresses who turned on the heat in numerous movies both in Bengali cinema and in Bollywood products with her 'glamour' and 'modern outfits'.

There was chock-a-block scenario with the crowd on Friday afternoon waiting for more than an hour.

And finally she arrived in an open jeep gracing the occasion clad in a black bordered cream coloured sari and a matching black blouse.

With her red 'sindoor bindi', the infectious smile and waving her hands - sometime right and sometime left - the crowd stood mesmerized.

However, not many were sure whether they would vote for the Trinamool Congress. One 20-something youth Kingshuk Banerjee said, "I am a Narendra Modi fan, but who does not like to see a star. Moreover, Moon Moon Sen's mother Suchitra Sen used to make my Dadu (grandfather) go mad. So, I am here. But my vote is reserved for Babulda (BJP candidate)".

But there were a large number of 'BJP supporters' of 2014 - who now say - they could vote for Moon Moon Sen this time.

"It will be my tribute to a film star. It is a proud occasion to record her movements on mobile," remarked Arabinda Purkayashtha, 33 clicking numerous selfies.

The political spotlight at the roadshow was, however, stolen by Aroop Biswas, a Minister in the Mamata cabinet.

In his speech, Mr Biswas slammed the Modi government for all issues ranging from demonetisation, failure to provide Rs 15 lakh to citizens to Prime Minister's frequent travel overseas.

"Only Didi, only our Mamata Banerjee thinks for the common people of Bengal. Let us strengthen her hands this election," he said evoking strong response from the crowd applauding Mamata Didi.

Some among the crowd make it a point that they interact with journalists.

Another woman - Pinu Chowdhury, a school teacher, says: "People of Bengal know the historic importance of this year's polls. We will hand over all 42 parliamentary seats to Mamata Banerjee and let the Bengal tigress conquer Delhi".

Turn towards the roadshow and the star of the occasion again.

"Ma sab dekhcheey (My mother is seeing all from above. The blessings of my mom will always remain with me," she says.

Of course - more often she takes the name of Mamata Banerjee - and adds: "Let us all do something for Bengal, like our Didi".

The fact that Moon Moon Sen humbled CPI-M veteran Basudeb Acharia in 2014 in Bankura is certainly in people's mind.

BJP leader Babul Supriyo and others have been generally cautious about Moon Moon Sen's star power.

"But we have our own star Narendra Modi. This election is about Modiji and not Uttam Kumar-Suchitra Sen films," says 46-year-old Jasbeer Singh, a Sikh gentleman from Asansol - whose vehicle was delayed due to the roadshow.

For his part - immediately after Moon Moon Sen's name was announced from Asansol on March 12, Mr Supriyo had tweeted: "Mamataji always presents me with SEN-sational opponents".

Well, like in cricket - there can be no final word 'sensation' or otherwise - till the last vote in the EVMs is counted.