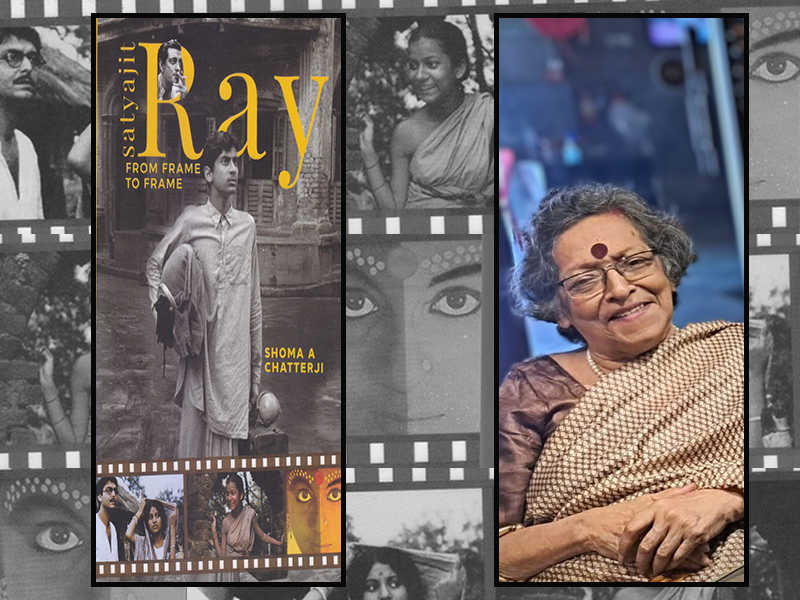 Award winning film critic Shoma A. Chatterji’s new book Satyajit Ray: Frame to Frame looks at some little known and less explored aspects in the maestro’s works. The author in a tete a tete with Ranjita Biswas

Satyajit Ray’s birth centenary (he was 1921 born) saw many books and films built around the maestro. How does your book give an alternate/different view, if it does?

My book is an exploration of minor nuances in Ray’s films which often go unnoticed by critics and scholars. Sometimes, they are noticed but get marginalised/ignored/forgotten in the bigger scheme of things.

You have made some interesting observations. For example, in the chapter ‘The Hunger Trilogy’ you focus on the old Indir Thakrun’s constant hunger through different symbols/ frames (Pather Panchali) in the film. Is it your own interpretation?

It is entirely my interpretation. Before this, I had written a book that studied Ray’s interpretation of Tagore’s literary works and how his films transcended, in a manner of speaking, the confines of the literary original through the language of cinema and lends itself to more detailed readings of the original in terms of the objects attached to the characters. The best example is from Bibhuti Bhushan Bandopadhyay’s Pather Panchali where Indir Thakrun’s ghoti –vessel, is like a metaphor of her life - old, dented, almost useless and used only by Indir Thakrun. In Devi young Dayamoyee is deified by her father-in-law which is seen as reflection of Ray’s anti-superstition view (later repeated in Ganashatru). But apart from the inherent patriarchy, you also talk about something rarely mentioned, if at all, wondering if the widower father-in-law felt a sexual attraction to the young woman. Is there any justification for this point of view?

Actually, this interpretation is not my own but I read it in a foreign reading of the film published in a catalogue on Ray which was edited by redoubtable Chidananda Dasgupta. This idea grew on me over a period of time and when I watched the film again and again while writing this book, I agreed with this critic whose name I can’t recall. If you watch Devi again, just notice how her father-in-law appropriates her entire time, space and relationships by placing her on a pedestal and claiming that she is a goddess which she is not. Even before this, we see her pressing her father-in-law’s feet. By claiming her as a goddess, he effectively deprives her of a normal conjugal life with her husband. The husband going away to Kolkata to study law conveniently separates him from his new bride. She can’t write a single letter to her husband or use the envelopes which he had left behind with his Calcutta address as she is now a ‘devi’ and no longer permitted access to her earlier life. There is also a scene where the older man asks her questions about her interaction with her husband which was socially forbidden during the time and place the story is set in.

In the chapter ‘Masculinity in Ray’s Films’ you have included Parash Pather about a middle aged man suddenly finding a touchstone and his whole life changing. It’s also a sardonic look at how lucre affects other people’s view of a person.  But how does he relate to this chapter’s focus area?

I believe that our cinema has largely presented a rather monolithic image of masculinity which is not true of any culture across the world especially in India. Masculinity is associated in cinema popularly with a youthful physique, attractive if not handsome, active and so on. Ray has given a very broad description of both masculinity and femininity. Paresh Babu does not tick a single box among any of these qualities. He doesn’t even fit into the box of the Bengali bhadralok who is understandably an intellectual, of high birth, genteel and also, quite arrogant. So, I noticed in him Ray's manner of understanding and respecting ‘masculinity’ from his perspective as a filmmaker. 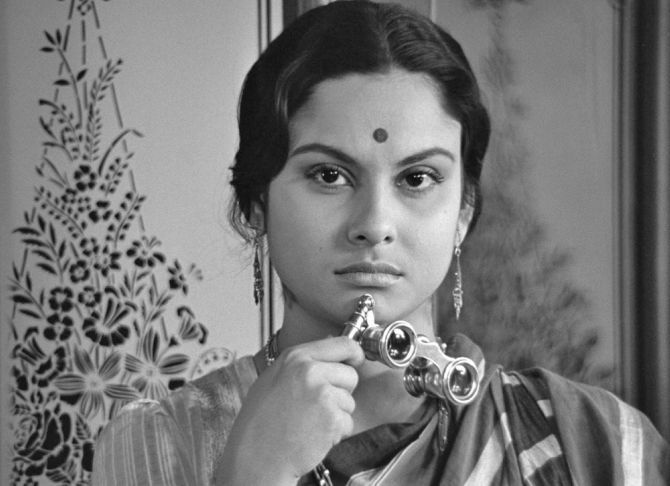 Madhavi Mukherjee in Charulata. Image courtesy Shoma A Chatterji/Woman At The Window

As a film critic, how do you look at Ray’s interpretations of great literary works?

Taking Tagore as an example, in Nastaneer,  the original story for Charulata, the protagonist doesn’t use any opera glasses. But Ray gives her one to present to the audience Charu’s perspective of the world outside the windows of her house, of her ‘distant’ husband, of a boat sailing in the distance when she goes on a trip with her husband, Bhupati. The opera glasses evolve to symbolise Charu’s evolution through the film. Ray’s films are flush with such concrete objects that don’t exist in the original story. Arati throwing away the lipstick in Mahanagar, Amulya’s Oxford shoes dirtied in the village slush in Samapti and many other examples.

My favourite remains Postmaster which was roundly criticised by many for changing the ending of the original story. Ray’s answer was that Tagore had written the short story many years ago where Ratan, the teenaged girl (in the story) falls at the postmaster’s feet, weeps copiously and begs him to take her with him. But when he made the film in 1960 he couldn’t see Ratan’s behaviour the way  Tagore wrote it so many decades ago and shows Ratan not only refusing the coin but also never speaking to him again. But we see her from another angle with tears rolling down her cheeks. She is much younger than the original Ratan of the story too. This interpretation was brilliant.

Any book in the pipeline?

Two  actually. The first one is ready to hit the market is Through the Lens Brightly. It takes a look at a few women directors, taking one film of each, to study and analyse how they have represented the working woman in their film. They are – 36,Chowringhee lane, Rudaali, Luck by Chance, Talash, Parched, Lipstick under My Burkha, Neel Battey Sannata and Raazi.

Another is tentatively titled The Male Gaze- Redefined (1975). It argues against Laura Mulvey’s theory of the “male gaze” on the assumption that as the directors are male, as also are technicians, they deliberately use their cinematic infrastructure to use the women in their films as an object of titillation even if they happen to be the subject of the narrative. I’ve tried to show that in India, the ‘male gaze’ is mainly cultural and sociological. There are many male directors who have never used the women in their films as ‘objects’ of titillation, for example, Vijay Anand in Guide, Shyam Benegal in Zubeida, and so on. And look at other films made by male directors like Mahanagar, Sahib Bibi Ghulam, Aandhi, Ek Din Pratidin, Andhi Galli, and you’ll know what I mean.

(Satyajit Ray: Frame to Frame is published by Vitasta)