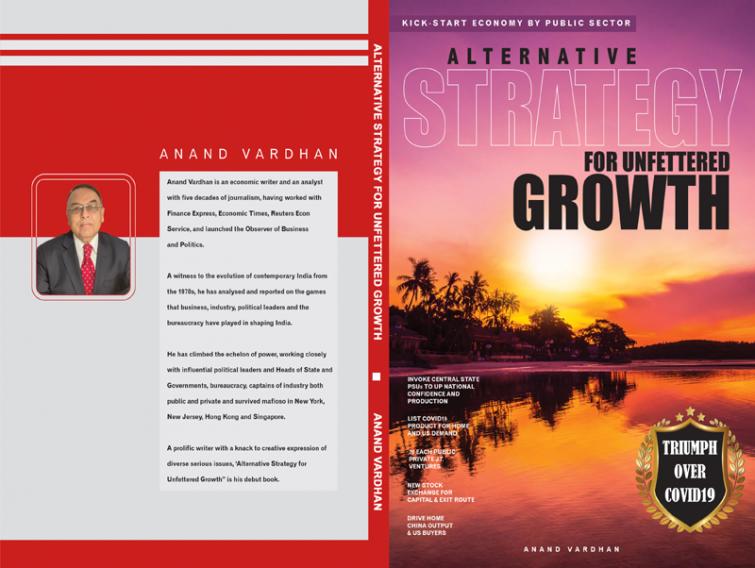 The author conducted intensive research into the economic lives of people across India and also drew upon his own in-depth knowledge of the subject for his debut book 'Alternative Strategy for Unfettered Growth'.

Congratulations on the release of  "Alternative Strategy for Unfettered Growth". You are not a full-time writer. How and when do you manage time to write in between your regular career?

I am indeed a full-time writer. I have been a journalist for over decades. The only difference is that I have been writing for newspapers and not books so far.  One does require specially allocated time for writing books. I have seen it this time about writing the "Älternative Strategy for Unfettered Growth".

Perhaps when you set a target for yourself, I guess your mind automatically adjusts everything around you to find adequate time to write.

What kind of books inspire you as a writer? Who are your favorite authors and poets?

Primarily books which deal with real-life development issues that could be either inspiring or enable others to learn from other experiences. Keeping this in mind you don't have many authors with that kind of exposure in life, hence always looking for new authors who bring fresh food for thought and action.

That's quite a question! Right! It is indeed a mystery as to how and why I decided to turn to book writing.

Well! Quite honestly, this COVID19 pandemic is an eye opener! I saw the pain in real life. I saw people losing their jobs. I saw people with no money. No business. No money in circulation and everything closed down!

I saw life come to an end as though! No future! Nowhere to go! Misery all around.

Not only in India but the world over.

I saw the government making every little effort to help save people from the pandemic. Saw them give dole to the poor and the needy. Saw them give food. They did their best. Also allocated huge funds to banks to lend to revive the economy. Yet nothing was happening.

I did my research and spoke with people right across the country, even the villages in eastern UP, Madhya Pradesh, down south in Tamil Nadu and Kerala and Odisha.  There were no signs of revival.

Then I saw economists galore vying with one another to stake their claim to the best assessment regarding the net decline in the country's growth. But there was none talking about the revival strategy.

That's when I put on my thinking cap and drew up a strategy for kick-starting the Indian economy.

I called it an ALternative Strategy as it was totally different and out of the box as though. Five decades of engaging oneself in the development and growth process of the country, I have been privy to the government and the economic requirements.

Besides, my business acumen also came to play in designing a foolproof Strategy to Kick Start the Indian economy in the post-pandemic era.

Thus the book. I worked day and night to ensure that I finish the book asap and to send it to the honourable Prime Minister as my contribution. And perhaps that's where you have yet another book writer in the competitive environment.

What are you doing to let readers know about your book?

I have indeed planned a media bash with some 200 TV  channels covering my interview along with releasing to the print media the Executive Summary of my book: Alternative Strategy Strategy for Unfettered Growth, along with my letter to the Prime Minister.

Tell us something about your book. Some highlights.

The book essentially deals with India's worst-ever crisis since gaining its independence in 1947. There is an urgent need to kick start the economy while ensuring sustained development and growth. In a historical perspective, the book establishes the fact that even though the government is allocating huge funds to banks to help kickstart the economy by lending to trade and industry, nothing is happening yet.

Hence, the book suggests an alternative strategy of invoking the long-forgotten public sector (PSU). The 349 PSU companies which are nothing but the government itself and spread right across the country should be used as the real instruments of growth and kick start the economy.

As a government, the PSUs should inject confidence among small and medium scale entrepreneurs by establishing scores of joint ventures with them, in an open display of hand holding by the government per se.   This will generate a new class of business on a pan India basis.

Besides, the book suggests unshackling the public sector by bringing them under Niti Aayog , which is headed by the Prime Minister himself, giving them the freedom of action like the big private corporations.

The book also suggests the creation of a new stock market where only these new PSU sponsored joint venture companies will be listed, enabling them to mobilize resources and secondly ensuring the exit of PSUs once the JVs start doing well.

Besides, these JVs should be created as global players with international production standards and should be used as effective tools to take India to the next level as a superpower in technology. This would mean global acquisitions, mergers and amalgamation to acquire technology be it in civil or defence areas of interest to the world at large.

Tell us something about yourself and your background.

I have told you already that I am a journalist by profession. And an economic writer and an analyst with five decades of journalism, having worked with Finance Express, Economic Times, Reuters Econ Service, and launched the Observer of Business and Politics.

I have witnessed the evolution of contemporary India from the 1970s, and analysed and reported on the games that business, industry, political leaders and the bureaucracy have played in shaping India.

I have had the unique privilege of climbing to the echelon of power, working closely with influential political leaders, heads of state and governments, bureaucracy, captains of industry both public and private and having survived mafioso in New York, New Jersey, Hong Kong and Singapore.

A prolific writer with a knack for creative expression of diverse serious issues, ‘Alternative Strategy for Unfettered Growth” is my debut book.

Do you plan to take it up as a full-time profession if the response is good?

Quite honestly I do full-time multi-tasking.

That means i continue to do my journalism but at the same time, i like to create new technologies to subserve the needs of the human being! Hence, I do business and indeed I now like to write!

As I said my only purpose in writing books is to bring to life real-time happening and extraordinary situations for the readers to take lessons from. Rather than to lead my readers to fantasise beyond realms of reality.