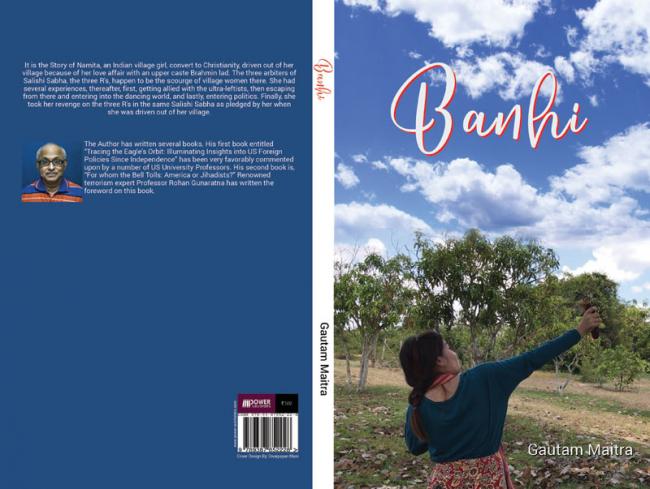 Gautam Maitra’s 'Banhi' is the story of a young girl’s journey through life, braving through injustices, crimes, and cruelties that life presented her with, to her final victory.

The book covers a wide range of issues starting from constricting orthodoxy of  a rural Indian society to the social and political ups and downs and their impacts on innocent human lives, including the lives of the political rebels and the struggles of women against the merciless ‘Salishi Sabha’ (Kangaroo Court).

Issues of acute casteism, racism, religion, conversion, women’s rights, existential and identity crises, and a multitude of other concerns  are in abundance throughout the novel.

The story traces the life of Namita (a member of the Oraon tribe) and her struggles against the “three R’s”, the cruel arbiters of Mahulban village, which form the main plot; the subplots are built around  the lives and actions of those surrounding her.

Namita, strong-willed and free-spirited, is humiliated and driven out of her village due to her relationship with an upper class Brahmin boy, Aurobindo. She vows to come back and take revenge, thereby bringing justice to the land of perpetual injustices.

Rescued by some ultra-Leftists, she has no choice but to join them.

Maitra has presented the plight of women in a man’s world, acutely and in graphic detail.

He describes the steps taken by Namita to achieve her goal – returning to the same place from where she was thrown out several years ago.

As free-spirited as a streak of fire, also called ‘Banhi’ in her native tongue, Namita faces whatever life presents her with, to engulf every evil entity and purify, like 'Banhi'.

Maitra’s novel is bound to leave a mark on its readers, with its essence of familiarity through its honest rendering of the society’s dark truths.

It is a story about the perpetual tug of war between good and evil, at once entertaining, fascinating, as well as identifiable at several junctures.

The book is definitely recommended for all kinds of readers, since, once started, it will be impossible to stop till the last page is turned.

The book is priced at Rs 500 and is available from power-publishers.com, flipkart.com and ebay.in.