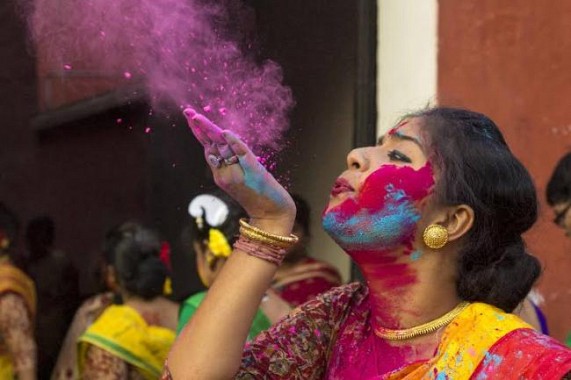 West Bengal celebrates Holi as the 'Dol Jatra'. Here the people celebrate this day by placing the idols of Krishna and Radha on a Palki (Palinquin) and they carry them around and play with Abir (Gulal).

The Basanta Ustav, as the people of Bengal might call it, is the festival of love, colours, songs and dance. Girls dress up in sarees and boys adorn dhuti-punjabi.

The Basanta Utsav is celebrated in a special way, in Santiniketan and Jorasanko Thakur Bari, the places which resided the Nobel laureate Rabindranath Tagore. This festival in every which way is related to the his sonnets, songs, dance forms and literature.

24-year-old student of Rabindra Bharati University, Pranoy Bhattacharya said, "Basanta Utsav is, according to me, celebration of love and the madness that surrounds it. There is a lot of Bong-ness to it, which I love the most. The colours, the Rabindra Sangeet, the Rabindra Nritya, I mean, what is not to love?"

In all of India, the festivities of Holi start a day before, with 'Holika Dahan', a bonfire that marks the burning away of the evil.

The story of this festival dates back to mythological India, as the word Holi comes from the name 'Holika', the sister of king Hiranyakashipu. Hiranyakashipu was adorned with special powers and he thought himself to be inevitable.

Hiranyakashipu's son Prahlada was a devotee of Vishnu and did not believe in his father's rantings. Hiranyakashipu was angered and he tricked Prahlada to sit on the lap of his equally evil sister Holika and ignited the pyre.

Holika was supposed to be immune to the fire but the fire burnt her and encased Prahlada as he prayed to Vishnu. Prahlada lived on.

Next to the Holika dahan, comes the day of Holi, when people gather in huge numbers and play with powdered colours (gulal), water guns and water balloons. Children enjoy the most on this day. It is almost a fight so as to be the kid with the fanciest water gun available in the market.

Also, the history of Holi takes us to the Rangpanchami, a 16 days celebration in the Brij region of North India, the birth place of Krishna. Holi festivities mark the mythological union of Krishna with Radha.

20- year- old student of South City college, Archiesman Banerjee said, "I haven't spent my childhood here in Kolkata. It was pretty much a nomadic life and I got to live in many cities of India. Holi is a bit different everywhere but what is so amazing is the fact that people celebrate it in the same spirits."

On being asked about his feelings on celebrating Dol in Kolkata he said, "It's something that comes to me naturally. I am a Bong at heart and I love the festivities. It reminds me of my childhood actually. Me and my sister used to fight for the bigger water gun and when we would come home, all colourful, we would have Gujiyas."

The festival is not only about colours, it is about food too. There is a Holi-specific platter of sweets, especially Gujiya, Kheer and Thandai.

The markets look utterly colourful with the gulal laid out in stalls and the people
go round the place to look for their favourite colours.

Holi is a festival that brings a riot of colours that brings together people and fills them with love, compassion and brotherhood.