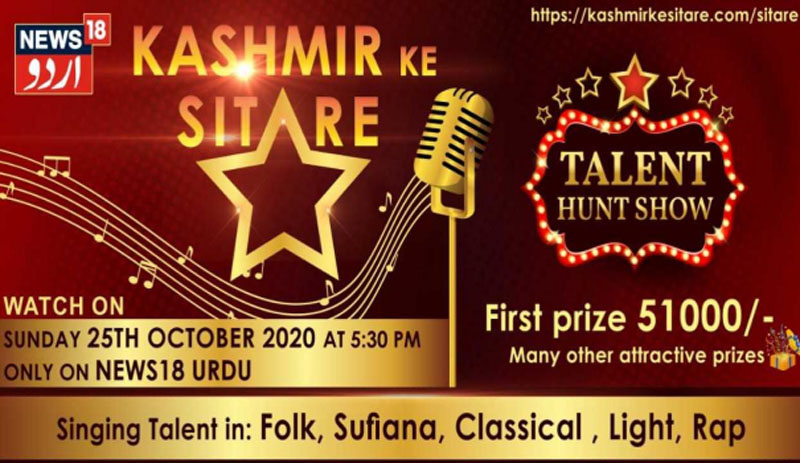 Srinagar: A musical talent hunt competition for the Kashmir Valley was organized by News18 Urdu at Tagore Hall, Srinagar.

The musical event titled ‘Kashmir Ke Sitare’ was initiated from 8 August, 2020 under the aegis of Kashmir Glowkar Society in joint collaboration with News 18 Urdu TV Channel.

“There is no dearth of talent in Kashmir. Our youngsters have excelled in every field. In Music and art also many youngsters are doing very we in Mumbai and other parts of India.

This talent hunt show provided a platform to all such youth so that their talent can be recognised properly and other youngsters will also be encouraged to come forward and showcase their talent to entire music world” said Group Editor, News18 urdu Rajesh Raina To participate in the ‘Musical Talent Hunt’ show the aspirants had to record their videos on mobile, and WhatsApp them to News 18 Urdu.

The talent hunt competition was organized in the categories’ of Kashmiri Folk, Sufiyana, Light Classical and RAP. Only Kashmiri folk or original compositions were accepted in the approximate two months long promotion.

Over 130 auditions were received from all over the valley, even from the remotest areas. The grass root participation of artists was heart warning.

Once all the audition were received they were screened and the best 20 performances were shortlisted for a live competition.

The final competition was held in Tagore Hall on 19 Oct 2020.

The contestants sang poetry of famous poets of Kashmir, which filled the auditorium with synchronized symphony. Their performances were judged by eminent artist like Gulzat Ah Ganie, Waheed Jeelani and Showkat Yaqoob. Who apart from judging the contestants guided them on the finer nuances of the music and history of the songs presented. The fiercely contested competition gave one overall winner and four runners up.

Junaid Mir who contested in the light classical category was adjudged as the winner of Rs 51,000 Prize of “Kashmir Ke Sitare”.

He was closely followed by the following Runner ups, who were awarded Rs 11,000 each Omar Farooq Bhat and Waqar Khan in the Sufiyana category.

Saqib Shah for Kashmiri folk music category. In the RAP Category the performance of Arshid Rasik and Musaib were jointly adjudged as the Runner ups.

The prize distribution was done by the jury who hailed the competitive Spirts of all the participants.

The event ‘Kashmir Ke Sitare’ was aimed to revive the forgotten legacy of our cultural and traditional heritage while-at the same time strived to provide participants an expert guidance while competing to showcase their skills before an appreciative audience.