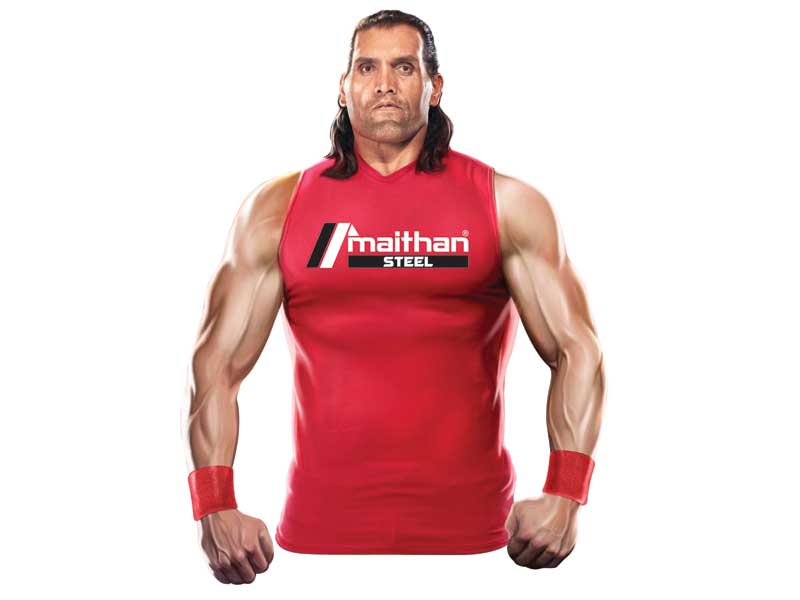 Kolkata: Maithan Steel has unveiled its revamped identity of ‘Nirmaan ka Maandand’ with the launch of new advertising campaign  starring The Great Khali, a great Indian wrestler and an epitome of enormous strength in the country and beyond.

On its completion of almost two decades in venturing into iron and steel industry, Maithan Steel has taken an initiative to educate the consumers about today’s market with the new TVC.

During the post-Covid era, considering the significant transition in the market especially in terms of consumers’ increasing propensity to buy more ‘value-centric & samajdar’ products, the company is focusing full-fledged on highlighting its strong, flexible and smart product profile.

While iron and steel commodities are the backbone of strength of people’s home, most Indian consumers are not much aware when it comes to the choice of right TMT. Maithan Steel is aiming to drive mass consumer awareness through the TVC, Press and Digital in association with Khali.

Conceptualized by 82.5 Communications, the TVC will go live in Hindi, Bengali and Assamese, majorly targeting markets of Eastern and North Eastern India. The campaign will be promoted through print media, outdoor advertisements and television channels along with the digital platforms of Maithan Steel.

Eyeing at the huge opportunity in iron and steel market, Maithan Steel aims to reestablish its position of strength and value with the former WWE Champion. Maithan has a prominent presence in markets like Bengal, Bihar, Jharkhand, Eastern UP along with North-eastern states, comprising total 3% market share in Eastern India. As Maithan Steel stands out for its value-based product relating to strong TMT, bringing a personality who is an epitome of strength and core values, will create an impact amongst the consumers to position Maithan as the most consumer-preferred brand. In the campaign, The Great Khali partnering with ‘Maithan Man’, which is a brand mascot expounding the philosophy of Maithan Steel.

Commenting on the initiative, Madhur Agarwalla, Director, Maithan Steel said, “It is critical to sustain a strong identity in consumer’s mind and Maithan’s association with world’s one of the greatest strength icons will indeed enhance the brand impact on consumers. We have a series of 7 TVCs for this campaign, has been skillfully created serving both purpose of giving consumers a light note of fun and educating them along with about the brand and its key message. Through innovative marketing strategies, we aim to be most consumer-preferred brand when it comes to the iron and steel industry.”

“We are glad to associate with Khali for our campaign. As he re-establishes our value of strength, this in turn would help us engage better with our consumers - thus re-instilling the sense of trust, strength and dependability in them for Maithan Steel., said Kaushal Agarwalla, Director, Maithan Steel.

“Considering the challenging times, reaching consumers with the right choice of product is the need of the hour. The new campaign of ‘Nirmaan ka Maandand’ will ensure end-consumers about the power and loyalty of Maithan Steel - a significant step to communicate Maithan’s brand values to stand out in the industry.”, said Projit Sarkar, General Manager, West Bengal, Maithan Steel.